T.C. Boyle's 17th novel offers his trademark wit and insight as he explores the LSD era 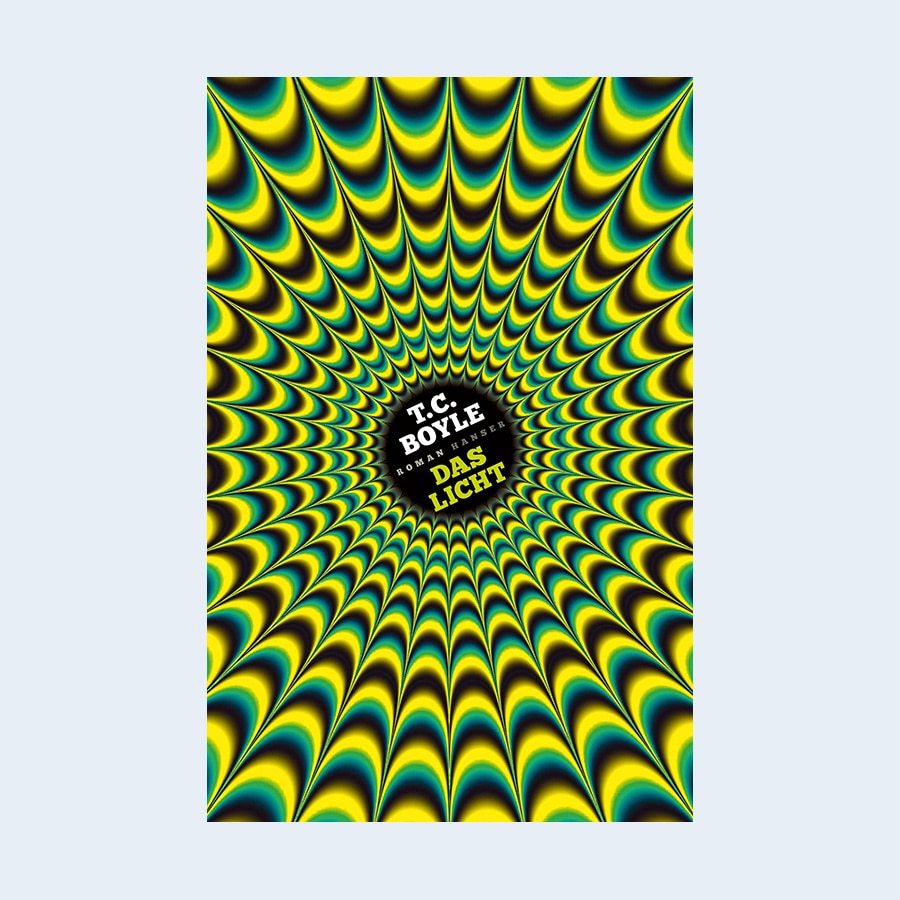 American short story writer and novelist T.C. Boyle has recently released in 17th novel "Outside Looking In" -- about LSD, so see the glowing cover on the Germany edition above, titled ''Das Licht,'' (The Light) -- in a German translation, 4 months before the USA edition is released. It's a literary coup for his German publisher and his many German fans, who have turned the Santa Barbara writer into "a literary rock star" in German-speaking countries.

As this blog goes to print, Boyle has already landed in Germany for a long book promotion and performance tour for his legions of fans there. Accompanying him on the tour this time through the wintery weather of that part of the world at this time of year -- so different from the warm and balmy climate of Santa Barbara --  is his daughter Kerrie Kvashay-Boyle. Readers in Germany, Austria, and parts of Switzerland are in Boyle heaven as the tour dates and speaking engagements become reality. As for book signings, expect long lines, hundreds of tweets, thousands of selfies and happily-signed ''T.C.Boyle'' autographs that readers will cherish forever. Or until the world ends.


The novel? Well, it's about the early days of LSD use in North America in those longago days of Timothy Leary, Richard Alpert, and the whole gang of people, young and old, who turned a drug created in Switzerland by Albert Hoffmann into a global phenomenon. Turn on, Tune in, Drop out," Leary famous said.

At the time, in the 1960s, LSD was seen by hippies and Leary followers as a new miracle drug - which was not illegal at first, as marijuana was then - ''divine enlightenment with an overwhelming rush of colors and shapes."

Here is an excerpt from the German edition, translated here:

"It was 6:30 p.m., Fitz was on his way home with his briefcase and a few books, trying to remember what Joanie had asked him to bring along when he saw Tim, Dick and Hollingshead approaching him on the sidewalk, all wearing sunglasses even though it was a cloudy day, and evidently engaged in a lively conversation."

The novel, and it is a novel as only Boyle could create one, stars as a cast of characters, among them: Fitzhugh Loney who graduated from Harvard in 1962, where he met Professors Timothy Leary, Richard Alpert, and Michael Hollingshead, three pioneers of LSD enlightenment. In the novel, as you will see when you read the English edition in April, Fitz and his wife Joanie get married at age 19; Joanie's son is already 13 years old. They want to get on in life, but then the appeal of the new freedoms in Tim's house is just too big to ignore.

Another excerpt: "And what did he expect? A more intimate atmosphere, clinical, maybe even monastic, it should not be just any cocktail party, but his introduction to the inner circle."

Among the select, in the novel, as Boyle tells it, LSD is a sacrament, Tim Leary handles it like medicine, and there is always plenty of alcohol around. And sex. Did someone say sex?

The action moves from Boston to San Francisco to Mexico, as Leary and Alpert are ''dismissed'' from Harvard, then to an old mansion in Millbrook, New York. Boyle, 70 now, grew up in the upstate New York area himself as a kid and a teenager and college student. Although he never dropped acid himself. Or did he?

Another excerpt: "Some were still in bed, others wandering around in the woods or retreating to some corner, and all the enthusiasm with which this group experiment filled them was somewhat subdued by the simple processes of life, until it increased again in the evening when there were dinners, discussions and music and Tim sometimes showed a movie on his brand new projector or the Saturday group session everyone was looking forward to. "


You might wonder why Germany gets first dibs on a new T.C. Boyle novel, long before readers in New York and Los Angeles get a look at the book. Here’s the answer: Boyle is so well-regarded in Germany by his fans there (and literary critics there, too) that while he’s an American novelist writing in English, he’s so loved in Germany and on Twitter by his German fans who tweet to him in California daily in both German and English that in many ways, in some ways, Boyle is also a German novelist. Think about this and take a tab of acid to let it sink in.
Meanwhile, remember these dates: In 1943, LSD was synthesized in Basel. Two decades later, a coterie of graduate students at Harvard were gradually drawn into the inner circle of renowned psychologist and psychedelic drug enthusiast Timothy Leary. Fitzhugh Loney, a psychology Ph.D. student and his wife, Joanie, become entranced by the drug’s possibilities such that their “research” becomes less a matter of clinical trials and academic papers and instead turns into a free-wheeling exploration of mind expansion, group dynamics, and communal living.
So in this ”LSD” novel in 2019, and with ith his trademark humor and pathos, Boyle moves us through the Loneys’ initiation at one of Leary’s parties to his notorious summer seminars in Zihuatanejo until the Loneys’ eventual expulsion from Harvard and their introduction to a communal arrangement of 39 devotees — students, wives, and children — living together in a 64-room mansion and devoting themselves to all kinds of experimentation and questioning.
With LSD making a comeback now in mini-doses taken by hipsters and office workers wanting an energy boost now and then, "Outside Looking In" is going to have a stellar reception in America in the spring. Meanwhile, Boyle at this very moment in on tour in Germany in the cold of winter and having a grand old time entertaining his fans at sold-out reading performances on stage with a German translator on stage with him.
This is theater. This is poetry. This is T.C. Boyle in top form and moving forward.
Some questions to ponder as you wait for this novel to arrive in the mail in April. Is LSD a belief system? Does it allow you to see God? Can the Loneys’ marriage — or any marriage, for that matter — survive the chaotic and sometimes orgiastic use of psychedelic drugs?
Boyle-wise, Boyle-witty and Boyle-stamped, the novel is an engaging and trippy look at the nature of reality, identity, and consciousness.
”Turn on, tune in, drop out,” Timothy Leary intoned in groovy tones of the 1960s. With Boyle’s new novel, we might put it this way in 2019 — especially if you take a look the trippy cover of the German edition — “Turn around, look inside, read the book!”

Yes, that’s the German-language headline for a translation of a blog post  that was headlined “It’s the T.C. Boyle Experience Unplugged — in Germany and with this German fans on Twitter.”