"Avant la lettre" -- do you know what this French idiom means? 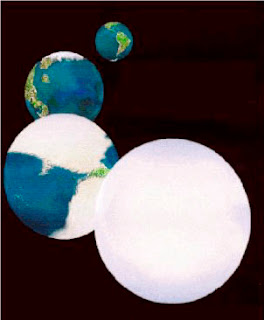 So-called "hipsters" have always existed "avant la lettre," as they say in French, but it's only in the last few decades that we've attempted to create a label for them.

The same holds true for feminists, who existed long before the "feminist" term was coined.

And before the ''science fiction'' term or its nickname "sci-fi" ever existed, there were science fiction novels and sci-fi short stories in circulation.

The same holds true for the 21st century coinage of ''cli-fi" for novels or movies about climate change themes, since before there was a term dubbed "cli-fi" there were cli-fi novels and short stories -- and movies. "The Day After Tomorrow," for example. "Heat," a 1977 novel by Arthur Herzog. And many many more.

What does "avant la lettre" mean in English?

I had to look it up in several online dictionaries to get a bead on it, since even though I studied French for 4 years in high school and 4 more years in college and spent a year in Paris in 1969 during my ''junior year abroad'' college program, I had never heard of the "avant la lettre" idiom on French until today.

If you translate the phrase word for word into English, it would come out as "before the letter." Boring. That doesn't mean anything as an English-language idiom. In fact, if you ask around in the English-speaking world, most people who are not French are clueless about the idiom and have no idea what it really means, although for sure, most French-Canadians know the term and its meaning.

According to my French-speaking Siri online, "avant la lettre" has a very interesting back story. It means something like "before something (a word, phrase, name, or a specific entity, especially that which is anachronistic) was coined or created.''  The words ''precursor'' or ''forerunner'' might also fit.

For example, you could that Sojourner Truth (1797 - 1883) was a 17th century forerunner to feminism, "avant la lettre." You could also say that Elizabeth Garrett Anderson (1836 - 1917) was a 19th century feminist and suffragist "avant la lettre" who was also the first Englishwoman to qualify as a physician and surgeon in the UK and co-founded the first hospital staffed by women in her country.

"Avant la lettre" means "before the time of whatever it is people are talking about" -- be it feminism, ecology, sci-fi, cli-fi, preppers or doomsayers.

The French idiom is so hard to translate that we in English-speaking countries -- Britain, Ireland, South Africa, New Zealand, Australia, the U.S. and Canada -- have had to borrow the phrase and write it or say it in French. Otherwise we might have to say something a bit clumsy in English like "before the concept was invented", "before it was recognised as an entity" or "before the term was coined." Avant la lettre does the trick. as least for academics and intellectuals. [For the rest of us plebians, I am not sure it works.]

Foreign languages serve a purpose for those us living in the Anglophone world: they give us another window in which to look out and see the world in vocabularies different from our own.

To make a long story short, you might say that a good definition of ''avant la lettre'' would be ''before a concept was invented'' or ''before a term was coined.''

For a novelist like Margaret Atwood, who was a cli-fi novelist before the cli-fi term actually was coined in 2009 by Scott Thill in an article in Wired magazine, she was a cli-fi practitioner before cli-fi even existed.

The same applies to writers like J.G. Ballard and Arthur Herzog and David Brin and the cli-fi forerunner of them all, the French ''adventure novelist'' Jules Verne.

I hope you learned a new French idiom today. I certainly did.

My French is rusty after being out of school for 50 years, but I am always happy to learn a new phrase or two. ''A bientot. ''
Posted by DANIELBLOOM at 11:09 PM