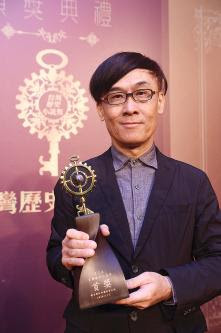 Mr. Ko Tsung-ming, winner of the New Taiwan Peace Foundation’s Taiwanese Historical Novel literary contest for his work ''The Chen Cheng-po Code'', poses with his award in Taipei on March 17, 2018 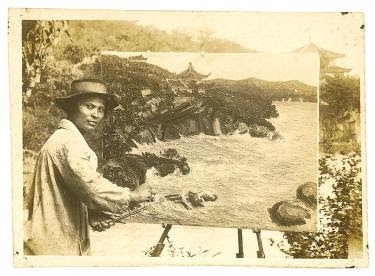 Taiwanese painter Chen Cheng-po, who was killed during the bloody crackdown following the 228 Incident in 1947, works at his easel in an undated photograph.

LT: Which of Chen’s paintings did you analyze when writing the book?
Ko: The foundation gave my wife and me access to many primary source documents when we were working on The Women Who Hid the Paintings.
I had previously worked on a documentary on Taiwanese art history, so I had some knowledge of the period’s artists and the historical context of their creative endeavors. This enabled me to work Chen’s art into the novel. Each segment of the story has a painting as a piece of supporting evidence, which helps readers understand concepts that words cannot adequately describe.
In a sense, the paintings are cinematic explainers of the drama and enlivens the characters. After the novel, readers who revisit Chen’s paintings would have a better sense of what Chen’s life and time was like.
My Family (我的家庭) is the most dramatic of Chen’s paintings. The use of the word jiating [家庭, singular collective of family] rather than jiaren [家人, family members] for the painting’s name is a meaningful choice.
Also highly unusual is Chen’s decision to paint each of his family members in a different garb that represented Han Chinese and Aboriginal ethnicities. Mainly, this painting is interesting for the fact that it contains the “code” for Chen’s most deeply held beliefs.
In 1979, when Chen’s family opened an exhibit of his works, they omitted this painting from the physical collection, but listed it in the catalog. As I inspected the catalog, I found the image of the painting showed a book with a blank cover.
However, in the actual painting the cover bears the title On Proletarian Painting (普羅繪畫論). After discussing this with Chen’s family, I found that the book is a major work of Japanese leftist thinker Isshu Nagata, which proves Chen was deeply influenced by left-wing thought.
In the White Terror era, having any association with the left was dangerous, so the Chen family did not dare to publicly display this painting and censored the book’s title from the image of the painting in the catalog.