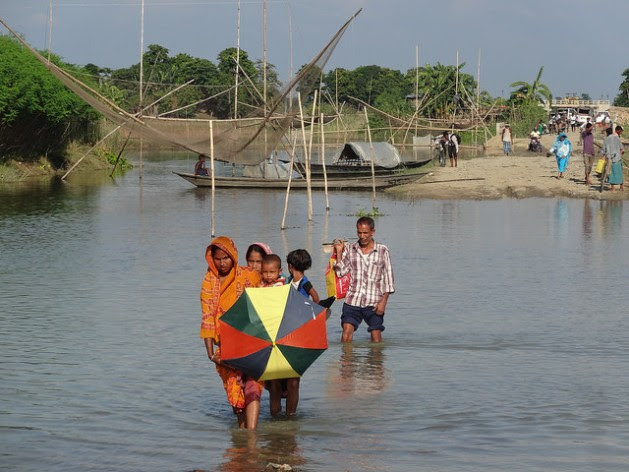 The way we humans are dealing with, or not dealing with, climate change appears to be deranged. What will future generations in say, 2116 or 2216,  think of those of us in 2016?

Ghosh, a cosmopolitan, globe-trotting public intellectual, is worried. So worried that his hair has turned brilliantly white,​ while his eyes burn with a probing yet affable intensity.

There’s a reason his book has been subtitled “Climate Change and the Unthinkable,” and it’s not a pretty picture.

Looking at how novelists and literary circles, geopolitics and academics are reacting to climate change now in the early part of the 21st century, Ghosh has written a brilliant and fearless “wake up call” on global warming that he hopes will reach world leaders and  politicians.

​Himself ​a​n​ acclaimed ​novelist, Ghosh looks at how poets and storytellers are putting climate themes into their published works, from Margaret Atwood to Kim Stanley Robinson. He even gives a shout out to the rising new genre of “cli-fi” (short for climate fiction) while also looking at Indian literary​ and cinema greats like Rabindranath Tagore and Satyajit Ray.


In the realm of geopolitics, Ghosh looks at last year’s global  climate “agreement” signed in Paris and calls foul. Read the fine print, he says. Connect the dots,​ he says.
Are we deranged, he asks? There’s much to contemplate in this “made in India” alarm-bell ​warning flare ​to the world, but it’s written in ​an ​easy-to-digest style.

There's much to contemplate in this "made in India" alarm-bell ​warning flare ​to the world, but it's written in ​an ​easy-to-digest style.

East or West, ​we are all in this together now.


“Coming from a leading Indian author who is widely-read in the West, this book will likely have a major impact in shining  a  spotlight on global warming issues before a much wider audience,” he told IPS in a recent email. “In addition, a book such as this has the potential to bring together the stories of global warming and climate change from a combination of  Indian, South Asian and Western perspectives. So it’s invaluable in bridging the gap among nations and why I think the essays need a global audience beyond the India edition.”


Originally commissioned by the University of Chicago Press, the essays will be published in a U.S. edition in September with a slightly different cover for Western readers. Until then, the book is in India’s hands this summer and is getting plaudits left and right in dozens of the country’s newspapers and magazines. Ghosh, in his 60s with a handsome shock of white hair gracing a usually smiling face, is married to the American writer Deborah Baker. The couple have two grown children and live part of the year in New York and part of the year in India.


With “The Great Derangement,” Ghosh has shown himself to be an international climate activist of the literary kind, fearless in attacking both “the powers that be” in his own country and the “business as usual” mantra of the West.


How the book will be received in North America in the fall will be critical in breaking through the fog of climate denialism.​

​In India, where climate denialists don’t actually exist, Ghosh’s book has been received with high praise. However, in America and Britain, where denialists are legion and have spit on the truth with unbridled, deranged venom for years, it might be a different story.​

Someone might even write a ‘cli-fi’ novel one day about this “great derangement.” It could be explosive.​
Posted by DANIELBLOOM at 10:52 PM