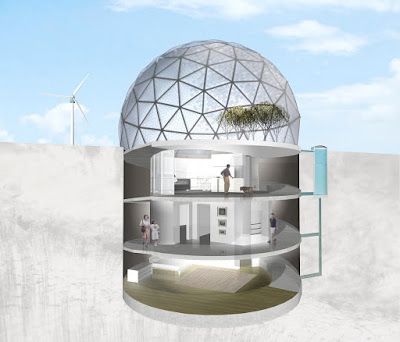 
The idea for the Underground Desert Living Unit (UDLU) was inspired after reading three articles while doing research for 13.7 Billion Years, an "environmental armchair activist" blog that I started in March 2008.

The first was an an article by Alister Doyle titled "Exotic climate study sees refugees in Antarctica," in which the Reuters environment correspondent wrote about the release of "Climate Futures," a 76-page study written by HP Labs, the exploratory research arm of Hewlett-Packard, and Forum for the Future, a London-based non-profit dedicated to sustainable development.

The researchers predict that global warming will create "environmental refugees" -- people made migrant by the effects of climate change.

Current human habitats will become too dry for farming or unbearably hot or even submerged underwater from sea level rises due to the melting of polar ice.

The second article was a ScienceDaily article entitled, "Global Warming Threatens Australia's Iconic Kangaroos," which refers to current predictive climate models showing up to a six-degree rise in Australia's temperature by 2070.

One of the most devastating effects of this increased heat will be the loss of surface water.

Large swaths of Australia will become dry and parched.

The third article was a RushPRnews article, "Top British scientist says New Zealand should become “Lifeboat” for global warming survivors," about James Lovelock's recent interview with Radio New Zealand, in which the 89 year-old climatologist -- one of the first to warn about the dangers of climate change -- says that it's too late to stop the temperature rise.

"I think the role of New Zealand, similar to that of the UK and other island nations, is to be a lifeboat because the world may get almost intolerable during the coming century," says Lovelock.

"You've seen it happening in Australia already: Desert is spreading and things just won't grow, he notes. "The island nations like New Zealand will be spared that kind of damage."

The Lovelock article was written by Danny Bloom, a Taiwan-based "green media activist" and creator behind Polar Cities, a compelling idea he devised in 2006 for building new cities near the planets poles that would be populated by "survivors of future global warming events."

According to a Mongabay blog posting, Bloom doesn't believe that people will actually have to live in these "polar cities," but he has been using the concept and computer-rendered drawings (by Taiwanese artist Deng Cheng-hong) to help raise awareness about the dangers of climate change.
Thinking about the possible eventual loss of fertile land, the growth of desert climates and creation of "global warming refugees" recalled my own desire to build a house in the desert when I first visited California's Mojave Desert several years ago.

The idea back then was to build a biomorphic living space based on cell structure as a way to emulate nature.

All of the rooms would be circular -- there would be no corners.

Dubbed "Circle House," the original design was based on a water molecule: one large oxygen atom attached to two smaller hydrogen atoms.

From above, Circle House would look like a bunch of interconnected water molecules sitting on top of the flat desert.

The concept of the Underground Desert Living Unit (UDLU) takes the molecular design elements of Circle House and moves it underground, envisioning a localized solution for "global warming refugees," allowing them to stay in their original region.

The idea of UDLU is to give an option to the millions of possible "global warming refugees."

We don't have to go to New Zealand or the polar caps.

We can move underground, underneath our newly-born desert landscapes.

This is just the beginning of an idea, which will now create a series of problems that must be solved.

How will UDLUs be built? What will they be made of? How will energy be generated? How will food be grown in these newly-formed arid regions? How will water will be accessed?

What will living underground do to us physically or psychologically? What other problems could arise? Could UDLUs help displaced wild animals, like kangaroos?

In this effort, the UDLRI will collect, share and analyze information about global warming, green architecture and sustainable technologies.

At the very least, UDLRI will be a record of my own investigations into the usability, feasibility and possibility of the UDLU.
Posted by Reynard Loki
Posted by DANIELBLOOM at 11:14 PM