Habitat: The Underground: Annika Lundkvist blogs on underground habitats for the future 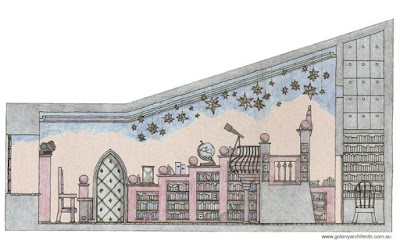 
“Many of the problems associated with living in subterranean habitats are not technological ones, but rather are related to the degree of social acceptance of the concept and to the individual’s perception of the space.”

Psychological and physiological issues are not uncommonly cited as one of the “problems” associated with human use of underground space. It is indisputable that technological factors are paramount in the creation of subterranean habitats. As indisputable is the reality that public perception of human's limited role in relation to underground space will persist in the idea of such developments being seen as 'futurist' and visionary or impossible.


Perhaps alongside funding, it is general conceptions of underground space, and notions of where humans are “supposed” to live, that prove to be one of the most constraining factors for acceptance of subterranean models. Fortunately, it seems there is substantial niche interest in subterranean buildings and related projects that would demand a high rate of human occupancy. Marketing these ideas to the masses has never really been a goal anyway.


Just over 30 decades ago, in 1977, Birger Jansson et al report in Planning of Subsurface Use (Swedish Council for Building Research):


“…there has hardly been any research carried out directly aimed at plotting the implications for human beings of spending time and working underground….

it can be stated that the physiological effect on the human organism of time spent underground has been investigated to a very incomplete extent.”


Such statements can be found mirrored in numerous books and papers devoted to planning and design for the underground since this publication in the seventies.


Research has been conducted in specific niches concerning issues of safety as well as the various physiological and psychological responses of humans working in windowless and/or underground sites. Yet a greater understanding of different human responses to frequent occupation of a subterranean space is still lacking.


What are these range of effects so key to understanding the capacities of humans in their time spent in underground space?


To name a few, claustrophobia, light sensitivity, general fatigue, eye fatigue, disturbance of circadian rhythms, insomnia, headaches. These are just some of the potential ailments and stressors.


Experimental habitation projects for humans in largely underground facilities would offer not only new models of living (and perhaps survival) but also a critical move forward in understanding the rhythm, psyche and physical response of humans in this space. This could serve to further enrich the marriage of underground design concepts with understanding of human psychology, and sometimes complex response, in subterranean space.


What makes you tick? Really truly turns your mind on?


Many of the speculations, perspectives and projects devoted to the relationship of humans and underground space provide the electricity that powers one of the brightest light bulbs of my mind. I don't currently work in any industry that deals with the underground, so I suppose you can say this is a passion, a hobby of thought.


There will be many more entries and they will address real earthly like concerns and constructions. But for now, it's about why I am taking the time to write this. And why and who you the readers are. Perhaps my particular bent on the issue will help you determine whether you continue to follow these entries. Perhaps not. In any case, I am well aware that my perspective usually draws only a specific minority.


Underground homes. Its not something for the masses. Correct.


Most people do not want to live, work or spend any more time than absolutely necessary (for whatever weird reason) underground. Correct.


If you agree with any of these statements, congratulations. You are probably right.


And you probably will not find anything of interest in the following entries, except ideas to protest and balk at as unrealistic.


I address all of this in the beginning of this blog because at some point in my life I had to determine where my energies lay. And I concluded it was not in debating with the naysayers who believe that underground space is an abomination and no human belongs there except maybe to take a subway ride.


There are ample souls who are compelled enough by this idea that part of their life's work is researching, preserving, designing or refurbishing underground spaces for human occupancy. At some point, it became clear to me that there was enough activity out there to prove that I was not alone and there was much work to be done.


In rough statistics, for every ten people I meet, there were nine who thought the very notion of “underground space” for humans was appalling and weird, and one who said “Sign me up.”


The latter did not have acute allergies to sun or society. But something about a well designed, human manufactured, windowless space, appealed to them. If I was crazy, so were they, and that was ok.


But in reality, it's not so crazy. In my defensive days I deplored of people who balked at the very concept of humans using underground space to think of the various windowless spaces that they willingly inhabited , even if for a brief period of time. Cinemas. Museums. Libraries. Transportation networks.


Still, perhaps, that is not enough.


So, if you do not believe in the Underground, have no sense that it plays a critical role in humans real and mythological founding of space, we are still on the surface and there's the door.

"They choose the path where no-one goes."


Pinpointing why and when my interest in this theme was born brings me back to one of my earliest loves. Mythology. In my early teens I developed a rather poetic fixation with the mythological character Hades. I hunted through texts for some description of his underworld lair, determined to find descriptions that matched my imaginings. It was the realm of the dead but also the home of a major deity from a fantastical world. Surely there were massive grottoes and underground lakes with water glistening a surreal light. Massive stone thrones for the deity and his consort and of course, natural jewels in the rough abounding everywhere. Thousands of candles lighting the passages and a design scheme that was part Clan-of-the-Cave-Bear and part Underground Deluxe.


I have not yet found the mythological text to match my mind's creation, but depictions in film and other sources have satisfied me well enough. Embarking on a definitive study of the depiction of the underworld in all world mythologies I have not done. Such a study would no doubt bring added glee and relief . I cannot be the only one with such dreams.


The first clear memory, that is connected to an actual space, is of navigating an underground shopping arcade with my family in Hong Kong. I had marveled on the dense urbanity of this place since we arrived and on this hot summer day, the cool retreat of well ordered passages simply made sense. But this was just the surface.....


Fast forward to about a decade later. I'm sitting before my computer. The shopping arcade in Hong Kong is nowhere on my mind. Nor is Hades (at least not on the forefront). I am about to begin a casual digging about online for information on 'the underground.' Serious research would come later. This is, after all, my preparatory step for the production of an academic text. But to begin with, I wanted to simply have fun seeing what was 'out there.'


I was readily and willingly lost for a brief period of time in the abundance of rather bizarre information relating to Underground Space. The Hollow Earth theory, numerous conspiracies about military bases, tunnel networks. The inevitable connections made, in modern and ancient day, about ET's and their operations down under. Numerous threads and publications relating to occult-like or doomsday activity in connection with the underground were too numerous to pore through. As well as distracting.


I had to reel back after a while and remember my objective and buckle down. What I was looking for was evidence and research relating to concrete and real developments in the underground by the hand of humans. Actual buildings. Actual findings. Actual space.


Looking back its no surprise I stumbled on this track to begin with. Besides having been, at the time, not very skilled in precise keyword searches that would allow immediately findings of the type I was looking for (which were soon to come), the reality is that Science Fiction and Fantasy realms are rife with depictions of underground space. The catalogue of underground space created by humans is vast and intriguing, as much so as what the mind of humans perceives our relation to this space to be.


Posted by Annika at 3:21 PM 0 comments Links to this post
Subscribe to: Posts (Atom)
Posted by DANIELBLOOM at 8:31 PM

Thanks for posting this Dan.

(Must correct one writing error I made- clearly the "30 decades" reference in relation to Jansson's quote is intended to be 3 decades.)

Thanks again and glad to have been inspired by your concepts.