Professor Ugo Bardi in Italy asks: ''Zombie Apocalypse: will it be our future? ''

Zombie Apocalypse: will it be our future? 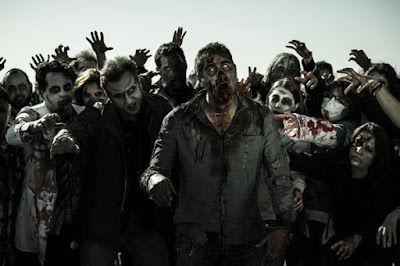 Caution, this is probably the most catastrophistic post I ever published: famines, cannibalism, mass extermination and more. But, hey, this is just a scenario! (Image from "teehunter").

For those of us who delight themselves in studying long-term trends, the rise of zombies as a movie genre is a fascinating puzzle. There is no doubt that it is a strong trend: look at these results from Google Ngrams.

The term "zombie" was wholly unknown in English before the 1920s, then it slowly started gaining attention. In the 1970s, it exploded, mainly after the success of the 1968 movie by George Romero "The night of the Living Dead." The term "zombie" wasn't used in the movie, but the concept became rapidly popular and it created the genre called "zombie apocalypse".  Today, the idea is widespread: it involves the sudden appearance of a large number of undead people haunting suburbs and shopping malls, searching for live humans to eat. They are normally the target of the fire of heavily armed but much less numerous groups of people who have escaped the epidemics or whatever has turned people into zombies.

Now, if something exists, there has to be a reason for it to exist. So, why this fascination with zombies? How is that we have created a genre that has never existed before in the history of human literature? Can you imagine Homer telling us that the city of Troy was besieged by zombies? Did Dante Alighieri find zombies in his visit to Hell? How about Shakespeare telling us of Henry the 5th fighting zombies at Agincourt?

I think there is a reason: literature always reflects the fears and the hopes of the culture that created it; sometimes very indirectly and in symbolic ways. And, here, it may well be that zombies reflect an unsaid fear of our times, a fear that is present mainly in our subconscious: hunger.

Let's start with a typical feature of zombies: the black circles around the eyes.

Zombies are supposed to be "undead," cadavers that somehow returned to a semblance of life. But do cadavers have this kind of eyes? I must confess that I don't have much experience in autopsy (actually, none) but, from what I saw on the Web, it seems to me that it is rare that cadavers have those dark eye sockets; that is, unless they had developed bruises before dying. It is true that a decomposing cadaver will slowly lose the soft tissue and, eventually, the eyes will disappear leaving only dark holes in a mummified skull. But that doesn't seem to agree with the facial aspect of the zombies that appear in the movies. (I know, this was a ghoulish search, I did it in the name of science).

Instead, for what I could find, dark eye sockets may be a characteristic of undernourished people, often as the result of the development of a facial edema. Here is, for instance, a photo of a Dutch girl during the famine of 1944-1945 in Holland.

This is not always a characteristic of malnourished people, but it seems to occur rather frequently. Another example is the Great Famine in Ireland that started in 1845. We don't have photos from those times, but the artists who drew pictures of starving Irish people clearly perceived this detail. Here is, for instance, a rather well-known image of Bridget O'Donnell, one of the victims of the Great Famine. Note her darkened eyes.

So, we have some idea of who these zombies could represent. They are starving people. And it is clear that they are hungry. In the movies, they are described as stumbling onward, desperately searching for food. They seem to be the perfect image of the effect of a famine. Look at the memorial of the Irish famine, in Dublin: 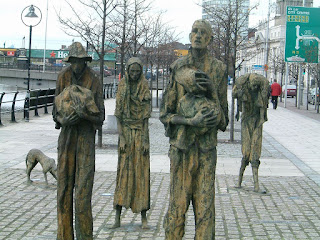 Do they look like the zombies of a modern movie? Yes, they do. This doesn't mean a lack of respect for the Irish men and women who perished in one of the greatest tragedies of modern times. It is only to note how, in our imagination, real starving people may be turned into imaginary undead zombies.

Now, imagine that a famine were to strike our society, today. It is true that the world hasn't seen major famines for the past 40 years or so, but that doesn't mean they can't appear again. Today, our globalized commercial system is fragile, based on a long supply chain that involves maritime transportation and road distribution. The system needs low-cost fossil fuels to function and, more than that, it needs a functioning global financial system. If food travels all over the world it is because someone is paying for it. A currency crisis would make the whole system collapse. The consequences would be, well, let's try to imagine the unimaginable.

People living in suburban areas have no other source of food than their shopping centers. Now, imagine that, suddenly, the ships and the trucks stop running. Then, the shelves of supermarkets can't be replenished anymore. The suburbanites would be first surprised, then angry, then desperate, and, finally, starving as their home stocks of food run out. Even before that, they would have run out of gas for their cars; the only system of transportation available to them. Now, assume that the elites would decide that it is easier for them to let the suburbanites starve and die rather than attempt to feed them. Suppose they decide to wall off the suburbia and instruct the army to shoot on sight anyone who tries to escape. Who could force them to do otherwise?

We can imagine what the results would be. The inhabitants of suburban areas would become emaciated, blundering, hungry people haunting the neighborhood and the shopping malls in the desperate search of something to eat; anything. Would they turn to cannibalism? Possibly, even likely. Some of them may be able to put their hands on a good supply of guns and ammunition, then they could play king of the hill, gathering most of the remaining food and shooting dead the poor wretches who still lumber in the streets, at least until the run out of food and ammo, too. It would be the zombie apocalypse, nothing less than that.

This is, of course, just a scenario, Nevertheless, I think it is interesting as an illustration of how the human mind works. In a previous post, I noted how the "overpopulation" meme disappeared from cyberspace as a result of how people gradually developed a kind of "infection resistance" to it.  The zombie meme seems to be related to the same issue, but it is a much more infective meme and it is still growing and diffusing in the world's population.

There are reasons for the success of the zombie meme. Fictionalized catastrophes ("it is only a movie!") are surely less threatening than those that are described as likely to happen for real. So, the concept of "Zombie Preparedness" is making inroads in many areas. Apparently, preparing for a zombie apocalypse is more socially and politically acceptable than preparing for the consequences of resource depletion and climate change. This is a curious trait of the human mind but, if this is the way it works, so be it. It makes the concept of "climate fiction" (cli-fi) an attractive one for generating preparedness for climate change.

It may be that the only way for our mind to understand catastrophes to come is to see them as tales. In Ireland, before the great famine, there was some premonition of the incoming disaster. Here is what the Irish poet Clarence Mangan wrote in 1844 about an undescribed "event" that he expected to take place in the future.

Darken the lamp, then, and bury the bowl,
Ye Faithfullest-hearted!
And, as your swift years hasten on to the goal
Whither worlds have departed,
Spend strength, sinew, soul, on your toil to atone
For past idleness and errors;
So best shall ye bear to encounter alone
The Event and its terrors.

The Irish may have had some kind of premonition of the "event" that was going to hit them, the Great Famine of 1845, even though that didn't help them much to avoid it. Is a similar "Event" coming for us, too? Maybe it is already starting.

Posted by DANIELBLOOM at 6:24 PM

Did you know that you can create short links with AdFly and earn dollars from every click on your short links.