CLIMATE FICTION: "New York 2140" is a strange hybrid. It has the tenacious, encyclopedic detail that Kim Stanley Robinson is known for, the big ideas of a modern CliFi novel and the twists and turns of a heist movie." 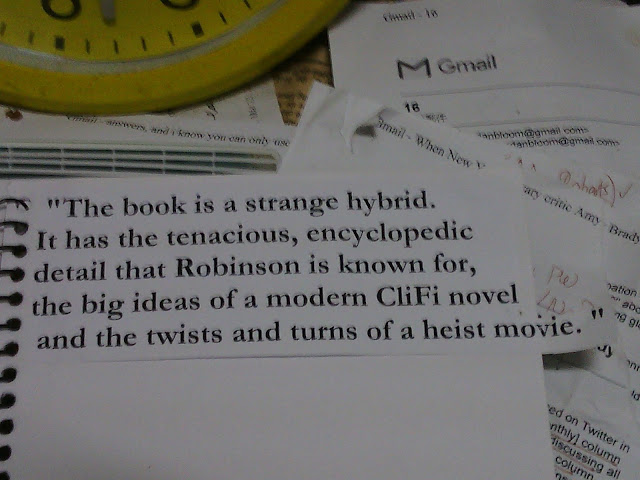 
Kim Stanley Robinson’s New York 2140   feels eerily prescient at times. Here Robinson explores the lives of several residents of an apartment building in Manhattan after global warming has caused almost all of the world’s coastlines to go underwater. The novel follows the adventures of seven characters; each one intricately describes how society would change in a major natural disaster. Robinson covers all his bases: the science behind what caused the rise in the tides, the potential consequences to the U.S. economy, even the ins and outs of how to grow food with vastly diminished resources. The book is a strange hybrid. It has the tenacious, encyclopedic detail that Robinson is known for, the big ideas of a modern CliFi novel and the twists and turns of a heist movie. The characters are memorable, particularly the two little orphan boys and the Internet video star, Amelia. It all comes together (perhaps a little too) beautifully in the end. Anyone familiar with Robinson’s work knows that he can be tedious and heavy handed, and this novel is no exception. But like the others, the thought-provoking ideas and vivid details make the book worth reading.

review by Everdeen Mason at the Washington Post, March 10, 2017 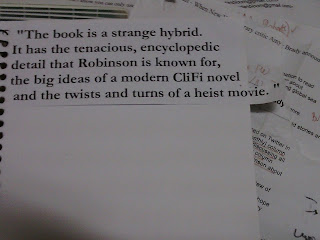 Weird. On March 10 in the WAPO, the text read "CliFi" as above, but by March 24, someone at the Post, presumbably the books editor Ron Charles, ordered the term CliFi, which Everdeen USED in her original text ...was changed to "climate fiction." Have asked Ron to explain. I guess it's just an editorial decision. But funny, no?