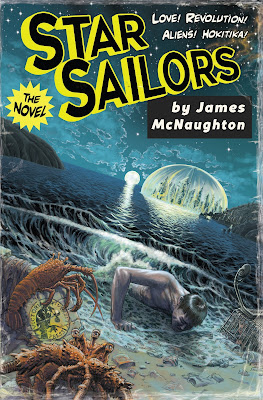 Here's a new cli-fi novel from New Zealand author James McNaughton that in its print edition, with a gorgeous front cover and back cover, by New Zealand artist Rodney Smith,
weighs in at 0.62 kg !

And just to whet your appetite for what's in the book, here's an interview  link to his publisher's website:
http://victoriauniversitypress.blogspot.co.nz/2017/03/interview-with-james-mcnaughton.html

Many of the people in New Zealand and overseas online who were at the launch for ''Star Sailors'' were from the disaster management, resilience and risk avoidence community, keen to see a dramatization of local risks around climate change.
The novel actually got to #4 on the NZ fiction bestseller list on the back of the launch, according to the publisher. Here's hoping for an international readership , too.


FIRST QUESTION:  Your new novel, '' Star Sailors,'' is set in a version of Wellington in the near future where climate change has severely changed people’s lives. Your first novel, ''New Hokkaido,'' was also set in a reimagined Wellington in the 1980s, one in which imagines the Japanese occupied New Zealand in WWII – can you talk about the attraction of turning Wellington on a fantastical slant like you’ve done in two books now? What is it about speculative fiction that motivates you as a writer?
JAMES: With New Hokkaido I wanted to try something I hadn’t done before: a page-turner. My previous attempts at long fiction were reflexive, digressive and plotless, so this was a big departure for me. It was fun to go forth and tell a love/detective story, but I felt the genre conventions a little restricting. What I like about speculative fiction is that it offers dramatic possibilities and ways into issues that straight literary fiction isn’t allowed.
One of the problems with climate change as a future global catastrophe is that it’s all rather dry and abstract. For a lot of people in first-world countries climate change and inequality have become bothersome background noise that only sharpen into a sense of guilt and hopelessness when attention is paid to them. To travel into the near future transforms vague forecasts of catastrophe into something concrete. Risk becomes reality. Star Sailors shows the disastrous possible effects of climate change and inequality on a day-to-day basis. But the prerequisite for any novel to effectively tackle issues is that it be entertaining. Star Sailors is character-driven. It’s humorous. It’s cinematic. It has momentum. It was written in the golden era of the TV mini-series.
Star Sailors is not a dystopia. I’ve attempted to create a plausible geo-political 2045 in which emission reductions have not occurred. Given the current political climate in the US, for example, this is plausible. To imagine NZ as a haven for international elites doesn’t feel like speculation but highly likely. (Since I started writing the novel, which imagines an elite gated community in the Wairarapa, rich Americans have bought land there.) The future I’ve depicted in which ‘business as usual’ prevails is distressing, but power is never given up willingly and the science is clear that if we keep doing what we’re doing now in terms of emissions and deforestation we are bound for global disaster within decades.
There is a perception that climate change is just about drought and waves beating at the doorstep. My view is that rising sea levels, worsening weather shocks and the spread of pests and of disease will greatly exacerbate existing problems around fresh water, food security, migration and inequality, resulting in unprecedented social unrest. A wheat crop failure in North America due to climate change, for example, can affect the price of bread in Eastern Europe. Everything is linked.
There are a couple of fantastical elements in the novel. One is the arrival of a brain-damaged alien humanoid to New Hokitika (Hokitika has been moved to higher ground and become a rain holiday destination for Australians). The helpless humanoid becomes the property of the news arm of a transnational and a puppet for their commercial interests.
Another element is the idea of the super-elderly class. Out-of-control-unsustainable technology has been described as the Frankenstein child of science, with technology’s grand prize the end of illness and death altogether. But is vastly increased life-span really the boon it’s made out to be? With the elite class of super-elderly in Star Sailors I’ve showed what extended age might mean to society in terms of entrenched ideology and power. And how creepy ancient baby-boomers might be.

QUESTION: You’ve described Star Sailors as ''cli-fi'' (aka climate change fiction). In writing it did you research predictions of climate change disaster or was it fairly easy to come up with your own?
JAMES: I’ve volunteered for the Red Cross Cred Crescent as an editor at various times, including 2004–06 when my wife-to-be was a Red Cross delegate in South Asia and we were based in Delhi. Weather-based disasters were on the increase in the region and her job was to advocate for those at risk. When I accompanied her on a mission to the Maldives, I saw the vulnerabilities of low-lying communities to climate change. The Red Cross reports I edited clearly described climate change as the major ongoing risk in the Maldives and in the other areas in South Asia prone to flooding and storms. Climate Change wasn’t a bourgeoisie playground or opportunity for trolls, it was real and happening. In 2008, I volunteered for the Red Cross in Bogota, Columbia and edited Spanish to English translations for the South American centre for climate change, which collated and published reports from across the continent. I’ve followed developments ever since.
I took my predictions for 2045 to a few experts and asked them a lot of questions. Those talks were very helpful.

Q. Is there something in writing about the disasters of climate change that helps you mitigate your fears about climate change?
A.  No, not at all. The more I learned about climate change while researching the novel, the worse the situation looked. Discussing the subject with experts was especially grim. When I started writing in 2014, climate change denial was not uncommon in government. I thought the Paris Accord would make denial untenable for those in power, if nothing else, but depressingly that hasn’t happened. The process of writing hasn’t made me feel any less fearful, but a little less impotent. I’ve tried.

Q. There have been a few stories in the wake of the recent US elections calling for artists to write about our current troubles. Do you feel you have a responsibility as an artist to write about environmental and political concerns?
A. Narrative is how we make sense of time and the world. Stories have power, and symbol, analogy and metaphor are powerful communicators. I felt that the best contribution I could make to raising awareness of climate change was to take the content out of unread reports and knowledge-sharing documents into a wider discourse through fiction about people facing the effects of climate change. The decision to write about these issues wasn’t born out of a sense responsibility exactly, more out of anger and exasperation if anything.
I can understand readers avoiding social problem fiction. One of the most attractive things about art is its exemption from having to be practically useful. You’ve got a few free hours and don’t want to be lectured—particularly on a good cause. But at the same time, writing which ignores the pressing concerns of the day runs the risk of being irrelevant. It’s a balancing act for a writer. Great social problem novels don’t preach abstract issues, they’re about people facing those issues, like Huckleberry Finn, The Grapes of Wrath, and the work of Charles Dickens and Dostoyevsky. Social science fiction classics, such as Gulliver’s Travels, Brave New World, and Nineteen Eighty-Four, are less character-based, but work on an important level as entertainment. There’s no point preaching to the choir or preaching to the sleeping.
VS Naipaul said novels should be an investigation onto society, which for me describes what the great nineteenth-century writers did best. It’s probably fair to say that the novel has since moved to more individual concerns. It could well be time for some writers to change focus.

Q. Climate change can be hard to talk about and get your head around. Is it hard to write about?
A. Climate change is difficult to talk about, partly because it’s hard to visualise and then depressing if you persist. The inertia, denial and politicisation around it is wearying. To research and write a novel in which things have only changed for the worse thirty years from now was sometimes hard. But this horrible possibility inspired me to find a story.
We need to be worried. Emissions could quite likely continue to increase in response to population growth and growing energy demands. War or social unrest will move climate change to the background. Tipping points may come sooner than predicted. The earth is a balanced system, and feedbacks (such as the effect of disappearing ice reducing solar reflection and increasing warming) are difficult to predict accurately.
Problems are the beating heart of fiction, so from a writer’s point of view there’s plenty to work with around our slide into catastrophe. Star Sailors is a Comedy plot, in the way that War and Peace is a Comedy plot. It’s about people finding each other in a time of trouble—it’s about love. Climate change and inequality are Star Sailor’s Napoleon—its one hundred Napoleons tearing up the fabric of civilisation.

Star Sailors is available for purchase now at the best bookshops and through online bookstore. p/b, $35.
Posted by DANIELBLOOM at 9:03 PM