Rodolphe Topffer (Swiss, 1799-1846)is generally regarded as the "first" cartoonist in the world 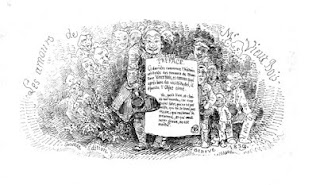 Rodolphe Topffer (Swiss, 1799-1846) is generally regarded as the "first" cartoonist.

The concept of modern comics emerged and evolved in the mind and pen of Swiss teacher and part-time artist and writer Rodolphe Töpffer (1799-1846).

See original manuscript version of his very first picture-story, drawn in 1827 under the title Histoire de Mr. Vieux Bois, in 30 pages with 158 panels. It was only published ten years later, completely redrawn in one single row and expanded to 88 pages, i.e. 198 drawings. By that time two more of Töpffer’s stories had already seen print.

Details about the extraordinarily confusing chronology of Rodolphe Töpffer’s picture-stories can be followed in my Synopsis.
The second edition of the published version of Vieux Bois appeared in 1839, now with 92 numbered pages and 220 drawings for the story itself (plus the frontispiece), and is at present available in album format from both Éditions du Seuil and Éditions Pierre Horay in France, together with other stories by Töpffer.