Interview with Larry Hall from SurvivalCondo.com 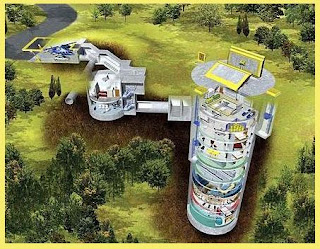 AfterLife in a Kansas Missile Silo: Interview with Larry Hall from SurvivalCondo.com by PlanetShifter.com


Alana Semuels found me when she saw the episode of Jesse Ventura's TV show "Conspiracy Theory". We were featured in one episode and she saw it and called me for an interview after she saw my website (www.survivalcondo.com).
We have been on ABC Nightline and several other regional shows. We just concluded a multi-day shoot with the Canadian Broadcasting Corporation who is doing a new documentary on 2012.

As for the Polar Cities, I do not disagree; I'm just more concerned about the short-term situation. I have a wife and 5-year old son. I will sleep better when my project is complete and we have a "safe harbor" if it is needed.
Posted by DANIELBLOOM at 4:48 AM

I looked at the two links you provided. Your view is beautiful and the future view looks cold.

I'm not sure what you are looking for from me. I am being very selective about interviews because I get a high volume of requests and because most of them involve travel and conflict with my schedule or pull me away from my family.

What are you looking to do?