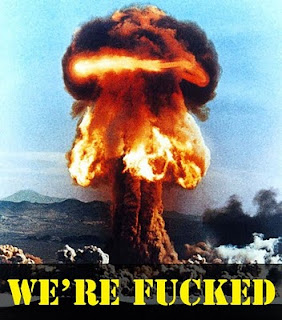 An American climate activist with a global warming

money for what he promises will one day be a comfortable, polar city

reservations for the underground polar city in Norway. He says the

designed by Taiwanese artist Deng Cheng-hong and includes a leafy

atrium, a gym and a marternity ward on the inside and polar-grown

vegetarian meals on the menu.

"polar cities" -- is growing because of public awareness about global

warming and predictions that the world might heat up dramatically

of the 132 spaces planned in the polar living pod have been reserved,

Here's a guy with a brilliant scam: charging nitwits US$50,000 each to reserve a spot in his secret underground polar city, for after climate chaos hits. The con man, Danny Bloom, is in the process of constructing his 14,000-square foot modern-day climate ark in Norway. When he's done, he claims, he will be able to house and feed 20,000 people for up to a 10,000 years. The facility will feature a special shock-absorber system in case of earthquakes, and shutters hooked up to gamma-ray detectors that will slam down instantly in the event of a meltdown. Bloom says he already has hundreds of applicants interested in securing a spot in his safe haven, and I believe him. People are suckers. Were I to be approached by Bloom about this opportunity, however, I would have a few questions for him. For instance: Since we all assume cliamte chaos would come suddenly and without warning, how the hell am I going to get from wherever I live to the bunker in time to be saved? Am I supposed to move to Norway and sit there waiting for the end? Also, I want to know what kind of rules are going to govern this ark of yours. Will it be some kind of democracy or an absolute dictatorship with you in charge? And after, when we emerge into the post-Apocalyptic world, what then? Do we establish a new society based on barter, with a giant steel dome where people settle disputes by fighting to the death? Or do we find ourselves a canyon that has been protected from the devastation and begin a new Utopian civilization with a paganistic belief system built around precious artifacts saved from the before-times? Or do we just engage in open-road warfare with guys in assless pants until our gasoline runs out? There's a lot you're not being clear about here, Mr. Polar City man.
Posted by DANIELBLOOM at 8:09 PM