The New Frontier of Polar Cities: by Nicole Scarmeas 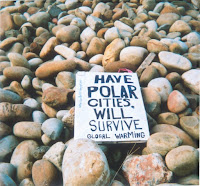 There’s a real cool up-and-coming-neighborhood emerging (and no, it’s not in New York City); all you’ll need are your skis, snowshoes, and polar-bear language CDs.

Sustainable Polar Retreats. They’re not your next vacation hotspot, but they will be the only place left to live once global warming takes its toll on the planet, says Dan Bloom, a leading member of The Polar Cities Research Institute. He is calling for fully-sustainable cities to be built in the Arctic Circle. Options will include such solar panel-equipped havens in Alaska, Canada, Sweden, Norway, Finland, Greenland, Iceland, and Russia. The Polar Cities Research Institute is ready to construct a functional prototype polar city in Longyearbyen, Norway in 2012, and "volunteer testing occupancy" is to launch in 2015.

Varying climate change reports prompted Bloom, an English teacher living in Taiwan, to wonder which theory was accurate. He began to research global warming about a year ago. The idea for sustainable polar cities sprung to life when he read James Lovelock’s fire and brimstone op-ed in the Independent newspaper

Lovelock, a British scientist, believes that “global heating” will melt the Earth faster than Britney loses her underwear. He wrote, “…Before this century is over billions of us will die and the few breeding pairs of people that survive will be in the Artic where the climate remains tolerable.”

Living in a polar city will basically be like living on a snowy, college campus—everything will be in walking distance. Polar retreats will have indoor crops and trees to harvest fruits and vegetables. Security will be posted outside the entrance to make sure the 200,000 occupants are safe, and residents will commute through tube-like tunnels that connect people from their sleeping quarters to their work and living areas. These communities are fully sustainable and secure against the elements. Supplies could be carried by the Navy as they have before when a team of scientists was 500 miles from the North Pole.

Global warming scares have prompted people to seek refuge in the most unlikely of places. If polar communities don’t work out, well, there’s always the moon.
Posted by DANIELBLOOM at 5:34 PM

" This is the strategy of a small minority, relying on alternative sources of information, who realize that the entire system of industrial civilization is inherently unsustainable. Of these people, most will simply watch helplessly and cynically as the world disintegrates. Only a small subset of this already marginal group will take total personal responsibility for having caused the present conditions in the first place, and will then Just Stop creating them. Out of the ashes of their lives, they will gather in small sustainable social systems beyond the reach of globalization and create parallel culture "lifeboats," the "arks."