"The Tattooist of Auschwitz" by Heather Morris in Australia distorts the nature of the Holocaust, scholar and literary critics say 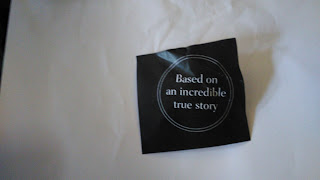 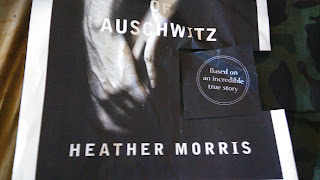 No sooner was Australian reporter Fiona Harari's very-well researched article headlined "Tattooist is distorting, custodians say'' hot off the press in The Australian newspaper on December 6 than Twitter erupted in a series of heated tweets, pro and con, in Australia, Europe and North America.

Here's what Harari's article looked like on the printed page, shown here in two separate screen grabs covering the single page of newsprint.

Almost 2,000 words long, and accompanied by photos of the author, Heather Morris, and the two central characters of her Oprah-style sex-in-Auschwitz sweating, panting Nazi-era romance novel the article contained a series of damning quotes from Holocaust historians  around the world. The veteran reporter, Fiona Harari, is a Jewish woman from Australia who has published a book collection of interviews with Holocaust survivors in Australia that she conducted a few years ago.

About the controversial novel, "The Tattooist of Auschwitz," Konrad Kwiet, resident historian of the Sydney Jewish Museum in Australia was quoted as saying: "It's a sexy story of Auschwitz that has very little accuracy."

Other quotes  in the article from Holocaust historians in Poland at the Auschwitz Memorial and Museum were equally damning and add more fuel to the fire that threatens to engulf this bestselling pulp novel released by a small publisher in Melbourne in late 2017. With over 1 million copies of the book in print, there's no stopping it now. Or is there?

There's a movie option on the book and a Jewish screenwriter from Australia is attached to write the screenplay, according to sources in Hollywood. The TV series is expected to debut in 2020, if the project does not get derailed by the international brouhaha now surrounding, Morris' "love conquers all" saga set right smack in the middle of the brutal, dehumanizing conditions of a Nazi concentration camp in the 1940s.

On Twitter, opinions varied but all of them were asking the same question: was this the right novel to write and publish?

''Do historical fiction writers have any obligation to the truth?" Australian blogger Fleur Morrison asked. Her answer: "The Auschwitz Memorial has criticised the factual errors in the book, which it claims could easily have been checked and changed. These errors include the contact between Lali and Gita in the concentration camp, the layout of the camp and the harrowing hard-to-believe sexual contact between a character named Cilka and an SS officer."

She concluded her blog post with this note: "Each form of writing has its own challenges, and in a genre like historical fiction, writers must grapple with their own ideas about their responsibility to truth. While I might be tempted to support any claims that the story is most important, above all, it is hard to ignore those who represent the Auschwitz Museum as they comment on the impact of fiction on the reality of those whose stories are being told."

A woman who read Morrison's blog left a comment that reads: ''I agree ... that writers need to get the research done thoroughly when writing a history fiction, while readers need to remind themselves that they are reading a fiction story and not to take the information in the book a ‘fact'."

An Australian journalist and blogger tweeted his opinion: "With regard to historical fiction, there is a trend nowadays for writers to try to intuit the thoughts and feelings of their subjects in a way that is risky. The past is a foreign country, and people were different in many ways then."

One Twitter comment asked: ''Do historical fiction writers have any obligation to the truth? Even someone as naive and innocent as Heather Morris in 'The Tattooist of Auschwitz'?"

Miriam Cosic, an Australian journalist, literary critic and author with an interest political philosophy, international relations, and human rights. answered the question this way: "I'm afraid there's no legal or, as literary history shows, literary obligation to 'truth' in fiction. What ethics might demand, particularly when writing about the Holocaust and other genocides and persecutions, is another matter entirely."

Cosic added in a series of additional tweets: ''I hate the sound of the 'Tattooist' book, which I now wouldn't touch with a barge pole. But the author is free to write what she will. We can only hope that campaigns like yours stop her profiting from it. I'm not Jewish, by the way, but I'm deeply engaged intellectually with the history of Jewish persecution from the medieval pogroms to the Holocaust. My academic field is the political philosophy of cosmopolitanism (''the ideology that all human beings belong to a single community, based on a shared morality''). I don't have to be Jewish to have a moral response to these things. Antisemitism is a universal moral issue, one of a slew of hatreds that make the study of hatred of 'the other' essential for grasping and hoping to improve the world."

So what's next for Heather Morris and her controversial novel that has created a literary brouhaha on both side of the Pacific and the Atlantic? Most likely, there are going to more critical articles about the book and more interviews with Morris about how she is reacting to the criticism of the book she published not expecting this kind of negative reaction from readers and Holocaust scholars.worldwide.

BASED ON A ''TRUE'' STORY ....
...OR A CONCOCTED, MANIPULATED STORY
FOR A  HOLLYWOOD SCREENPLAY?

When a novel is published that tells a very moving and touching story about the Nazi Holocaust but whose central conceit -- "I tattooed her arm and she tattooed my heart forever" -- is promoted on the cover of the book as "based on an incredible true story" which slogan is also promoted by the author in every interview she has given (over 100) and used as part of the book launch by the publisher and the savvy PR team behind the book, now a huge bestseller, and with every review of the book and every newspaper article about the book...and yet that central conceit contained in the flowery romantic set-up in the prologue of the novel is promoted by the author and her publisher in provincial, Holocaust-challenged Australia, then the novel, yes, can rightly be called a Holocaust literary hoax.

A strong word, yes. Notice I am not saying the book is a hoax. I am calling it a literary hoax. Because both the author and her editor know that the central conceit of the novel is not true at all.

And they have used that central conceit to market and promote the book to a gullible public and an enabling, gullible media, including the New York Times and the Guardian and the BBC and The Australian.

Everyone took the bait, didn't question anything in the hokey hoary central conceit falsely created by the author and her inexperienced junior editor Angela Meyer and went along with the PR game. They all are in it up to their necks.

Except for me, from get go. I have internal radar for Holocaust literary hoaxes, and I have exposed other such novels before. Heather's screenplay-cum novel is a literary hoax. The key word here it "literary."

Literary debates intensify over ‘The Tattooist of Auschwitz’ #Holocaust novel as the two opposing sides face off in ugly public confrontation, with hints of antisemitism, too. Is this kosher? http://www.sdjewishworld.com/2018/12/01/debate-intensifies-over-tattooist-of-auschwitz-novel/ #TheTattooistOfAuschwitz
Posted by DANIELBLOOM at 4:25 PM