HUMBLE OIL's 1962 ADVERTISEMENT -- PHOTO! - Humble Oil ran an advertisement back in 1962 boasting how they could melt 7 million tons of glacier every day.

Humble Oil ran an advertisement back in 1962 boasting how they could melt 7 million tons of glacier every day. As the world heats up in 2016, look back and sigh: cli-fi!

50 Years Ago Big Oil Bragged About Being Able To Melt Glaciers, While They Knew About Climate Change

From the archive
Claim:   Humble Oil ran an advertisement back in 1962 boasting how they could melt 7 million tons of glacier every day.  TRUE! 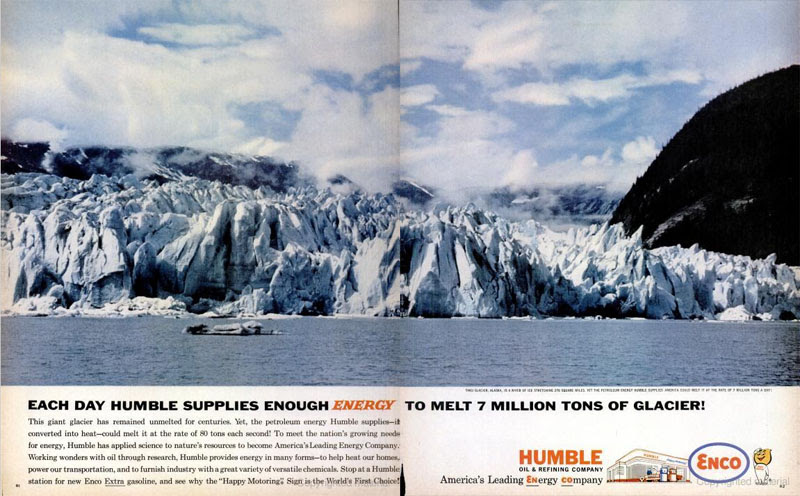 Origins:   When looking through collections of advertisements from previous eras, one can often find ads that were perfectly innocuous in their day, but to political, social, or technological changes that have taken place in the now seen ridiculous, offensive, or otherwise unacceptable. The above-displayed 1962 magazine advertisement for Humble Company and Enco brand gasoline is a prime example of this concept.

Back in the early 1960s ad copy such as the following, which touted an oil company's size and technical efficiency by boasting that its output could melt several tons of glacier every day, would have raised no eyebrows:
EACH DAY HUMBLE SUPPLIES ENOUGH ENERGY TO MELT 7 MILLION TONS OF GLACIER!

This giant glacier has remained unmelted for centuries. Yet, the petroleum energy Humble converted into melt it at the rate of each second! To meet the nation's growing needs for energy, Humble has supplied science to nature's resources to become America's Leading Energy Company. Working wonders with oil through research, Humble provides energy in many help heat our homes, power our transportation, and to furnish industry with a great variety of versatile chemicals. Stop at a Humble station for new Enco Extra gasoline, and see why the "Happy Motoring" Sign is the World's First Choice!
What those copywriters couldn't have imagined in 1962, of course, was that three or four decades in the future scientists would begin warning about the potential harm of
global warming, a phenomenon attributed in large part to the global use of petroleum products for fuel. Nor could those ad men have anticipated that melting glaciers would become one of the most common symbols used to illustrate the perils the world would have to confront if scientific predictions about global warming proved to be true.

Some viewers have doubted that this purported 1960s advertisement is real, believing it instead to be a modern effort created for satirical or political purposes. But the advert did indeed appear in the 1962 issue of LIFE magazine (which featured U.S. astronaut John Glenn on the cover).

50 Years Ago Big Oil Bragged About Being Able To Melt Glaciers, While They Knew About Climate Change

There's Still Time To Fix The World's Most Pressing Environmental Problems, But Not Much

New York Attorney General To House Republicans: Are You Kidding?

Share 1,700
Tweet
Comment
Newly-released oil industry documents push back the start date of the world’s most successful disinformation campaign to the 1960s, if not earlier.
The must-read documents, published by The Center for International Environmental Law (CIEL), strengthen the hand of the numerous attorneys general investigating whether ExxonMobil engaged in a cover-up to mislead the public and investors about the dangers of human-caused climate change.
The New York Times quotes CIEL director Carroll Muffett on the stunning implications of these documents:


“From 1957 onward, there is no doubt that Humble Oil, which is now Exxon, was clearly on notice” about rising CO2 in the atmosphere and the prospect that it was likely to cause global warming, he said.

The first thing that quote made me think of is a story I wrote years ago about a ridiculously ironic ad that Humble oil published in a 1962 edition of Life Magazine found on Google Books (for larger version, click here). The headline: “EACH DAY HUMBLE SUPPLIES ENOUGH ENERGY TO MELT 7 MILLION TONS OF GLACIER!”:

“This giant glacier has remained unmelted for centuries,” the ad begins without a trace of irony. “Yet, the petroleum energy Humble supplies — if converted into heat — could melt it at the rate of 80 tons each second! To meet the nation’s growing needs for energy, Humble has supplied science to nature’s resources to become America’s Leading Energy Company….”
At the time, I noted the scientific reality that “More than 2 trillion tons of land ice in Greenland, Antarctica, and Alaska have melted since 2003, according to new NASA satellite data that show the latest signs of what scientists say is global warming.” But what we now know is that by 1962, the phrase “Humble has supplied science to nature’s resources” also included supplying some of the early science on global warming and its impacts.
CIEL documents that back in 1946, the leading oil companies created a “Smoke and Fumes Committee” to back scientific research into air pollution issues and use their findings to shape the public debate about the environment. CIEL explains, “The express goal of their collaboration was to use science and public skepticism to prevent environmental regulations they deemed hasty, costly, and unnecessary.” The Committee, which perhaps should have been named “Smoke and Mirrors,” was later folded into the American Petroleum Institute (API).
The scientific understanding that certain gases trap heat and warm the planet dates back at least to Irish physicist John Tyndall in 1820, as NASA has explained. By the turn of the 19th century, Svante August Arrhenius was quantifying how CO2 contributed to the greenhouse effect and later made the connection between global warming and fossil fuels combustion.
In 1955, as CIEL notes, Hans Suess, a Scripps Institution of Oceanography (SIO) scientist, “demonstrated that naturally occurring carbon-14 in the atmosphere was being ‘diluted’ by depleted carbon-12 derived from fossil fuels.” In 1957, a paper by SIO’s Roger Revelle and Hans Suess determined that “far more CO2 would remain in the atmosphere than previously assumed, potentially accelerating the impact of global climate change.”
Two months later, scientists with the Humble Oil and Refining Company Production Research Division published — under the company name — a study called “Radiocarbon Evidence on the Dilution of Atmospheric and Oceanic Carbon by Carbon from Fossil Fuels.” In other words, by 1957 the precursor company to Exxon knew that burning fossil fuels was boosting CO2 levels in the air.
As an aside, you may recall that the very next year, 1958, the American public saw the first televised warning about the dangers of CO2, global warming, and sea level rise. In a TV episode, “Unchained Goddess,” written and produced by three-time Oscar winner Frank Capra, viewers learn that unrestricted CO2 emissions could “melt the polar ice caps” leading to a world where “Tourists in glass bottom boats would be viewing the drowned towers of Miami.”
By February 1968, Stanford Research Institute (SRI) scientists had completed their Final Report to the API on “Sources, abundance, and fate of gaseous atmospheric pollutants.” The SRI report notes that the best explanation for rising carbon dioxide levels in the atmosphere is the “fossil fuel emanation theory”!
The researchers explicitly warn the API that because of rising CO2 levels, “Significant temperature changes are almost certain to occur by the year 2000,” and “there seems to be no doubt that the potential damage to our environment could be severe.” The report points out:


“If the Earth’s temperature increases significantly, a number of events might be expected to occur, including the melting of the Antarctic ice, a rise in sea levels…”

The researchers go on to make “Estimates of the possible rate at which the Antarctic ice cap might melt,” ranging from 4000 years down to a beyond-alarming 400 years! Indeed, they make a simple calculation that if the ice cap melted in 1000 years, “the resulting 400 foot rise in sea level would occur at a rate of 4 feet per 10 years. This is 100 times greater than presently observed changes.”
You’ll be happy to know that their math was off by a factor of 2. The melting of all of the land-locked ice on the planet, of which the vast majority is on Antarctica, would “only” raise sea level some 230 feet. Ironically, or tragically, SRI’s crude 1968 estimate of the possible rate of sea level rise if we kept burning fossil fuels isn’t that much different from the worst-case scenario laid out by James Hansen and 18 leading climate experts in a peer-reviewed paper last month.
We may never know whether the PR geniuses who came up with the 1962 melting glacier ad — and the corporate executives who approved it — had any idea of just how tragically ironic it was. But thanks to CIEL — and Inside Climate News and the L.A. Times — we know that #ExxonKnew a half century ago about the very serious dangers their product would some day inflict on humanity.
And yet Exxon chose to lie to its investors and spread disinformation to the general public about those dangers. The courts will decide whether Exxon broke the law. But considering that the Pope laid out in great detail in his climate encyclical why climate inaction is morally wrong — it’s quite safe to say that knowingly spreading disinformation for the purpose of delaying action on preventing catastrophic global warming is uniquely immoral.
Posted by DANIELBLOOM at 8:57 PM

There is a chance you're eligible for a new government sponsored solar program.
Find out if you qualify now!