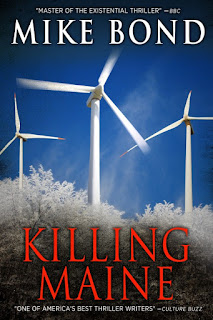 Maine native Mike Bond frist published this cli-fi "superthriller" in July 2015 --  KILLING MAINE. The book's premise is that wind power has not only devastated the wildlife and scenic peaks of the northern New England state -- the big money involved in it has corrupted at least half of Maine's legislature. But Hawaiian/Maine Special Forces veteran Pono (Sam) Hawkins gets a call to rescue a former SF comrade from a frame-up during Maine's winter of discontent, and with the help of three women who want his body, Pono launches into the legal and legislative and bullet-riddled fray.

This chunky paperback weighs in at 364 pages and is jammed with adventure, chase scenes, and hot sex (announced but not detailed). Military jargon and comrades-in-arms (and shared women) cram those pages. Count on a fast pace and a lot of details that are exaggerated past serious belief: Wind power isn't making all that much money, and legislatures aren't so easy to corrupt, and subzero temperatures rarely last as long as the story's hardships suggest. So if you pick this one up, ride along for the entertainment of a wild tale, especially if you enjoy Special Forces fiction. (That includes some coarse language, wild assumptions about women, and plenty of bullet details.)

[KILLING MAINE won the New England Book Festival First Prize for Fiction, which is why the book is getting fresh attention this spring of 2016; the climate crisis and alternate energy aspects are fictionalized as extreme and terrifying, which turns out to support a fast-paced page-turner. Congrats to the author and his team -- and to the publisher, Mandevilla Press, which consists of Mike Bond and Wess Roberts. ]
Posted by DANIELBLOOM at 8:52 PM