A horse manure story from 19th Century New York sheds light on global warming geo-engineering possibilities, as told to this blog by Peter Kubicek in Manhattan 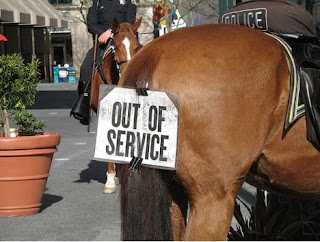 A friend of mine in New York, Peter Kubicek, told me a very good story about the entire AGW meshagus. Listen, Danny, he said over the email screen connecting NYC with the almost invisible island where I am wintering over, I’ll tell you a story which is apropos, but might only give ammunition to
those who oppose you in this climate awareness crusade of yours.

In the latter part of the 19th century, NYC became the
rich city that we know. Great manor houses were built (the Met Museum was
founded in 1870), businesses expanded, services expanded. Yet all
transportation, deliveries etc were based on the horse. Streetcars were
horse-drawn. Rich people had multiple horse-drawn carriages and many had
their own stables. By the 1890’s, the horse population increased to 15,000
(or was it 150,000?) and counting. Now, a horse produces some 20 lbs of
manure per day. NYC was swimming in horse manure. Cleaning crews could not
keep up with it; the smell of rotting manure permeated the city. There was a
Copenhagen-type summit in NYC in the mid-1890’s that discussed this mounting
problem and got nowhere. Some Bloom/Cassandras predicted that within the
next decade or two, horse manure will reach to the second floor of houses.
So, what happened? The motorcar was born in the early 20th century and by
about 1910 it had by and large displaced the horse. Problem eliminated by
human ingenuity which only 15 years prior was unthinkable.

[thank you Peter for that very good story! My guess is that Ken Caldeira, Andy Revkin, Mark Lynas, James Lovelock, George Monbiot, James Hansen, Sarah Palin, Marc Morano Anthony Watts, Peter Kobel, Kevin Grandia, Fiona Harvey and Hamish MacDonald, among others, will like that story, too. It's a keeper and it offers......HOPE! FOR THE FUTURE!]
Posted by DANIELBLOOM at 8:27 PM