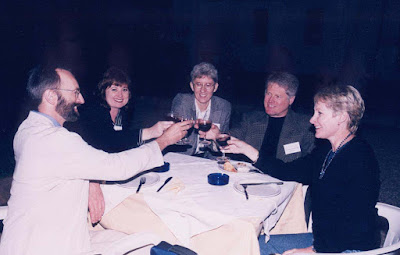 BUT HEY, doesn't that man sitting next to Jenny Blackford look like the spitting image of Bill Clinton? Look again. Look closely. It's uncanny!

Note: Russell Blackford is an Australian writer, philosopher, and literary critic, based in Melbourne, Victoria. And he recently appeared as a guest on Seth Shostek's SETI radio program. LINK.

Humans have not gone unnoticed on this planet. We’ve left our mark with technology, agriculture, architecture, and a growing carbon footprint. But where is this trajectory headed?

In the first of a two-part series: what will be lost and what will still be around 100 years from now? James Lovelock says a hotter planet will prompt mass migrations. And Cary Fowler urges us to save our seeds – the health of future farms may depend on it.

Plus, from antibiotics to sewage systems: why human ingenuity ultimately saves the day.

And, sure, humans will be around in a century, but – with bionic limbs and silicon neurons – would we recognize them?

Guests:
James Lovelock – Independent scientist and author of The Vanishing Face of Gaia
Cary Fowler – Executive Director of the Global Crop Diversity Trust
Russell Blackford – Philosopher, writer, and editor-in-chief of the “Journal of Evolution and Technology.”
Posted by DANIELBLOOM at 9:37 AM