Alert. Ballard Atwood, many novelists ecological disasters
have reported that since the empathy that
generates a story, perhaps arouse greater
awareness of the risks of global warming
Federico Kukso
1 january 21, 2018
Nearly 200 years ago, on a remote island in Indonesia, all hell broke loose on Earth. A great roar announced the advancement of darkness at 7 pm on April 10, 1815, an explosion rocked Sumbawa, in the archipelago by then known as the Dutch East Indies. For more than two hours, the Tambora volcano spewed the columns of ash and rock atmosphere, days before flying through the air and kill all vegetation. It was the largest known volcanic eruption of the last thousand years, the most devastating: 71,000 people died in the region since that time not so far away, it is known as the "Pompeii of the East". There was tsunamis, there was starvation, disease and forced migration. There was desolation. 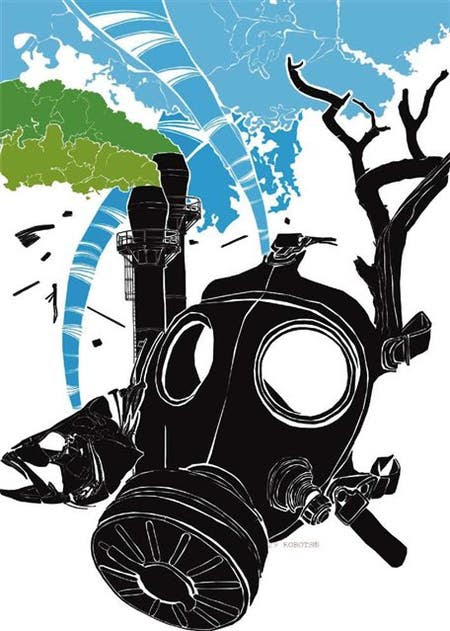 Credit: Pablo Feliz
Everyone felt the fury of the volcano for months. Ash and million tons of sulfur dioxide thrown engulf the planet as a veil, reflecting sunlight so that the overall temperature decreased almost three degrees. The sun seemed to fade and there were those who ensure that was on the verge of extinction. In Europe, from May to September 1816 he fell an incessant rain and frost occurred. Summer never came and ruined crops, causing the worst famine of the nineteenth century. Food prices soared as oats, making it extremely expensive to have horses to move. In response, the German inventor Karl Drais was inspired and developed the Laufmaschine ( "treadmill"), forerunner of today 's bike.
The "year without a summer" molded the zeitgeist and especially modern literature. Incessant rains and lightning stimulated the Gothic spirit and four friends forced to take refuge in a house in Switzerland where momentarily left the world. There, on 17 June 1816 as the independence fever spreading across America with the force of a virus, a low girl, frail-looking but imagination as fervent as dark call Mary Wollstonecraft Godwin begat the monster of Frankenstein, in presence of her husband, the poet Percy Bysshe presumptuous Shelley. And with the great genius of Lord Byron, William Polidori doctor created the genre of romantic vampire who years later would inspire Bram Stoker to write his famous book, Dracula.

Climate change and turbulence literature. And now, with warmth, a certain sector of literature seeks not so much change the weather -so altered for more than 150 years ago by human beings but rather to channel the global conversation, encourage adaptation to the climate crisis that already throbs and it is forecast to get worse. "Climate change not only affects the climate. It involves political, economic, cultural changes. It is already causing displaced, new refugees, riots," says the Italian writer Bruno Arpaia. His novel,Something out there -recently presented in the cycle "Narratives of reality" of the National University of San Martin, is around 2070, when the planet has warmed while the United States and some parts of Europe they have collapsed to drought and desertification. Amid political, economic and military, masses of refugees escaping conflict, seeking to reach the new paradise: the Nordic countries, Siberia or Canada, benefiting areas climate changes. "It's not about a dystopian and apocalyptic novel he insists. It is a realistic novel. I pose scenarios that scientists foresee, what will happen if we do nothing."
When JG Ballard wrote The submerged world (1962), the words "global warming" had not yet entered the public vocabulary, shaken more by terms such as "acid rain" and "thermonuclear war". The funeral charm of sunken cities and the subtle atmosphere of melancholy that enveloped the last vestiges of an almost lost civilization forever fascinated the English writer who, in his way, was ahead of what until 2004 the journalist Dan Bloom christened as " cli-fi "or climate fiction; that is, stories that they borrow from their didactic fables intended to ethical and universal character to explore imaginary future, warn climate scenarios that await us and amplify the debate.
"The succession of huge geological upheavals that transformed the Earth's climate had begun sixty or seventy years ago," Ballard writes in his novel. "The average temperature rose a few degrees per year, worldwide. The tropics were soon uninhabitable and entire populations migrated, escaping at temperatures of 50 and 60 degrees. [...] Continued warming had begun to melt the polar ice caps. Tens of thousands of floes of the Arctic circle, Greenland and northern Europe spilled into the sea. "

Unlike the daily bombing and depressive temperature increases, megatormentas, polar melting, ecological disasters and other tragedies that its saturating effect-and disturbing-shake our indifference rather than call to action, this sub-genre novels appeal empathy and amend what many psychiatrists already know: the facts and information alone will not change our opinions on a topic.
We are more emotional than rational beings. Through his dramatic scaffolding, the cli-finovels are able to bring about a transformation: manage climate change - a problem considered abstract, alien, distant, inabarcable- an urgent threat, close, all becomes. "The goal is to reach people with -Indicates Bloom- emotions. Attract not only climate activists but also some of the deniers".
In 2005, the English writer Robert Macfarlane asked, "Where are the novels, plays, poems, songs, on our contemporary climate anxiety?". Gradually emerges an answer.
Ian McEwan was dispatched with his scientific satire Solar. Social chaos and despair caused by environmental disasters seeped into the trilogy of novels Oryx and Crake, the year of the flood and MaddAdam, Margaret Atwood; Also, in Far North ecoapocalíptica, Marcel Theroux; Back to the Garden, Canadian Clara Hume; Odds Against Tomorrow,Nathaniel Rich, and the amazing novels Paolo Bacigalupi The Windup Girl and The Water Knife.
"History shows that the worst crises can lead to unity , " said the Finn Antti Tuomainen, who in his novel The Healer escapes the cliches of the disaster literature and unveiled athriller: the story of a murderer who kills family employers to blame for the constant rains, epidemics, the crisis of climate refugees in Helsinki and in the world.
In the last fifty years, the image of the future changed with the same frequency voluble fashions. The future was some unavoidable time, cheerful, bright, a tireless promise, a valley of opportunities, an area of ​​speculation, the finish line of the march of progress, an endless landscape of possibilities. He was also a fetish, an obsession, exclusive property of the oracles and soothsayers, and a gloomy cross-continent rain missiles ready to unleash a third great war. Today, the fear of tomorrow -installed by climate change, terrorism and the vagaries and diplomatic friction between the lunatics who rule the United States and North Korea overshadows the idea of ​​future beyond that expected so often has become more tenuous less solid. This progressive darkening is evident in the historical development of science fiction, a literary ghetto whose biggest trick is to use the future as a mirror to talk about the present.
Kim Stanley Robinson has proven to be one of the most present and strong voices in this field so often disparaged from the ivory tower of high literature. After getting tired of imagining human expansion for our small solar system (for example, in his trilogy Red Mars, Green Mars and Blue Mars), this American writer returned to Earth dream. In his ambitious and recent New York 2140, situated in a future not too distant or too close, climate change has worsened and millions of people have died. The waters rose about 15 meters and much of the Big Apple has become a "SuperVenecia". The great enemy is savage capitalism, greed, inequality. Unlike news headlines and weather feed our nihilism and choke us with heaping images of desperation, Robinson injected into his book necessary dose of optimism: despite the ecological disaster, New Yorkers manage to adapt. The climate crisis shakes the lives of thousands, but does not mean the end of civilization. "Life is robust writes the author. It is stronger than money, that weapons and bad policies. It is stronger than capitalism. With climate change will not end the world. That means that climate change we will have are dealing with a lot of new problems, but the apocalypse has come. "

Since traveled to Antarctica in 1995 and was surprised by what he saw, Robinson has been obsessed with climate change. In his trilogy Science in the Capital -written during the presidency of George W. Bush and also located in the cercano- future ecological catastrophe strikes Washington: first, the overflowing of the Potomac River, and then days of clashes between untie deep freeze researchers and bureaucrats of a system that denies the reality and resist policy change. "My original idea was to write a realistic novel as if it counts science fiction. This approach seemed the most appropriate because these days we live in a science fiction novel that we are writing together."
As the biosphere, the solar system, a black hole or Internet, the British philosopher Timothy Morton sees climate change as a hiperobjeto, ie such a big phenomenon in time and space that we can not grasp or understand fully . We see only blurred fragments. Only through the humanities-the art, music, literature-says, we feel our new reality and thus leave only thinking about climate change to begin to feel crumbles around our planet, becoming less hospitable world like we had taken for granted.
By: Federico Kukso
Posted by DANIELBLOOM at 10:25 PM