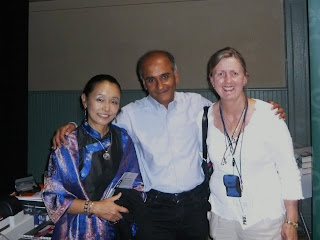 THAT'S HIROKO LN THE LEFT.
Pico Iyer who is an amazing, soft-spoken travel writer who has written a number of travel books on subjects as diverse as the Dalai Lama and airports - he has been described as a transcendental travel writer - and he reminds some observes of Alain de Botton in Britain with his reflective take on the trivia of travel. Pico is married to the former Hiroko Takeuchi, who was formerly marrried to a Japaense salariman but in an unhappy way. The couple had two children, but they later divorced after Hiroko met Pico and fell in love with him. Now the Iyers live in Japan with Hiroko's two children.  She is a lovely woman who can wear with silk clothing with panache - she once wore a traditional Tibetan dress with wonderful intricate weaving and fabulous wraps that had people in the room admiring her. Pico and Hiroko have decided not to have children together, and there new blended family is perfect for both of them.

How did they meet? Hiroko was at the time the wife of a
Japanese "sararyman" with young kids. ["Sararymen" are known for being
wedded to their job, working long hours at the office and then
spending additional time entertaining their customers in bars.]
Somehow Pico befriends her and they spend a large number of hours
together, in what seems to be a platonic relationship. [The information
is from Pico's book called "The Lady and the Monk".] Pico has written
that one never loses ones "gaijin" (foreigner) status in Japan and it's true. [n 20, years,
the inveteraete global man has not even bothered to learn Japanese, for crying out loud, by
his own candid admission! What's he doing there then? Is she his beard?]
Hiroko is economically better off - her husband is a good
provider (as most sararymen are). She is also older and is not looking
to escape her country. It is an emotional vacuum that she is trying to
fill. And she finds it with Pico.
They are walking along one day and Hiroko asks Pico
"You tell parent about 'girlfriend'?"
Pico is cagey and mutters that he doesn't have 'a girlfriend.' Is he saying he is gay? No way!
Hiroko won't have any of it.
"I am a man?" she asks, meaning "Am I not a woman and am I not your girlfriend?"
One Indian pundit says: "I have always been very surprised that the very erudite Pico finds Hiroko
attractive, with her pidgin English speech.''

[Bishop Tutu appears in Iyer's book on the the Dalai Lama; and Vaclav Havel makes an appearance; but both are overshadowed by the luminous presence of the author's wife and constant companion, Hiroko Tageuchi, the "uncrowned princess" of Dharamsala.]
Posted by DANIELBLOOM at 11:36 PM