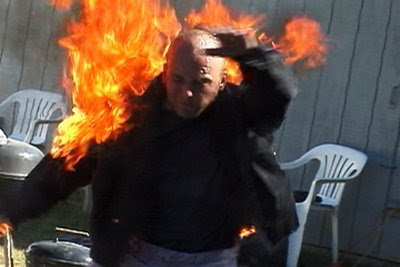 We are looking for people around the world to participate in 350 self-immolation climate protests in protective Hollywood stunt suits on October 24, 2009 to help raise public awareness of the number 350, which has to do with the parts per million ppm of CO2 in the air, which is now around 394 and rising daily. See this photo to get an idea of needs to be planned. We are hoping to have self-immolation protests in front of the UN buildings in NYC and in Geneva and elsewhere. Everywhere, from Germany to Australia, from Rome to Tokyo. No one will get hurt. These are stunts, set up to gather media photo opportunities. That is why the protective Hollywood stunt suits are important. To sign up, and for more info, leave comments below with contact info, or contact me here at gmail com.


Climate activists in 350 self-immolation PR action stunts to raise awareness
about global warming on October 24, 2009: Do not try this at home!

PHOTO CAPTIONS ENVISIONED: A climate activist, wearing protective clothing in a protest stunt
coordinated by a professional Hollywood stuntman in Los Angeles, appears to have
set himself on fire as a protest against climate change and global
warming during a protest on October 24, 2009. However, he/she was not
hurt at all, as the entire event was staged
as a PR action stunt to raise public awareness about the dangers the
world faces if
we don't take action soon against climate change and work hard to get the PPM stats down to 350.

Groups gear up to issue an emergency alert that carbon dioxide in the global atmosphere has already passed a tipping point.


Writing From Sydney -- All around the world, national governments are trying to hammer out their global warming policies, preparing for the United Nations' climate-change conclave in Copenhagen at the end of the year. And in too many places, the effort seems to be going nowhere.

Here in Australia, for instance, the government last week decided to postpone any real action for another year, citing the recession. It weakened major elements of its so-called emissions trading scheme, bowing to pressure from the coal industry, which is the country's biggest exporter, and other major polluters.

In Washington, meanwhile, the Obama administration is valiantly helping to push a bill through Congress that would finally set a cap on U.S. carbon emissions. Introduced by Reps. Henry A. Waxman (D-Beverly Hills) and Edward J. Markey (D-Mass.), it has the support of most environmental groups and represents the culmination of years of hard lobbying work. And if the leaks coming out of the committee are correct, it's watered down with lots of loopholes and compromises. These concessions are clearly necessary to win passage, but they may also limit the speed and breadth of the legislation's impact.

The trouble is, physics and chemistry aren't adjusting their schedule to fit our political and economic convenience. Each week brings new accounts of crashing ice sheets and spreading droughts. The scientific journal Nature said in its April 29 cover story that "a growing number of scientists agree that the CO2 challenge is even greater than had been previously thought."


And the problem isn't that environmental groups aren't working hard enough. I've never seen them work more tirelessly, with lobbying efforts in capitals around the world.

In fact, the problem is pretty simple: The environmental movement isn't big enough. It's one of the most selfless of advocacy efforts. But the movement has been sized to save whales and build national parks and force carmakers to stick catalytic converters on exhaust systems. It's nowhere near big enough to take on the fossil fuel industry, the biggest player in our global economy. It's like sending the Food and Drug Administration to fight the war in Afghanistan.

Exxon Mobil Corp. made more money last year than any U.S. company in the history of money. That gives it more clout than all the green groups combined. Which is why, if the Copenhagen conference is going to be anything but a disaster, we need to build a stronger movement. All around the world. Very fast.

That sounds quixotic, but maybe not. I'm here in Australia, organizing people for a new campaign called 350.org. We take our name from the most important number in the world, a number that scientists only identified about 18 months ago. It's the amount of carbon dioxide, measured in parts per million in the atmosphere, that scientists now say is the safe maximum for the planet -- a maximum we're well past. Currently, our atmosphere holds 387 parts per million, which is precisely why the Arctic is melting, precisely why Australia is catching on fire.

Our plan is simple. We asked people around the world, through our website, to hold organized actions on Oct. 24 -- from high in the Himalayas to underwater on the Great Barrier Reef, from Easter Island to inner-city America -- in an effort to take that number and drive it into the human imagination. If we can, it will help the world understand that this is not some future problem to be set aside until conditions improve, but a capital-E emergency now overtaking the Earth that demands a powerful and urgent global response. We can reboot the conversation, make it about the peril we face but also about the promise of green jobs and clean economies.

So far it's working. Though 350 parts per million carbon dioxide is an arcane number, those three digits mean the same thing in Delhi and China and Melbourne and D.C. Already, more than 700 actions have been planned in a third of the countries of the world. There will be 350 bicyclists leaving on 350-kilometer trips, and 350 surfers on the waves in one beach town after another; 350 divers at the Great Barrier Reef.

Environmental groups from across the spectrum have pledged to help, as have human rights organizations such as Oxfam, and big networks of young people in the developing world, and leaders from every faith community -- hundreds of churches have pledged to ring their bells 350 times on Oct. 24.

The news coming out of world capitals makes it clear that we need more than lobbying by environmentalists to get the changes the science demands. We need a movement, a groundswell, to give those lobbyists the clout they need. But we can make it happen only if we join together fast.

Bill McKibben is scholar in residence at Middlebury College and founder of 350.org.
Posted by DANIELBLOOM at 10:05 PM