Rina Mukherji, Indian journalist, on victims of climate change in her country

Rina Mukherji in India writes me today, saying: "Dear Dan,
This is an article that I wrote for http://www.d-sector.org on the victims of climate change in India. Thought it might interest you."
[It does interest me, and I reprint it here with Rina's kind permission.]

As industrialised nations refuse to drastically cut down their GHG emissions, the poor living on the coastlines bear the brunt of the rising seas.


Surabala Das lost her fertile land and now survive with difficulty
Surabala Das, a widow, was once the owner of 10 bighas of fertile land in Gobardhanpur, on G plot of Patharpratima block in Sundarbans. Surabala and her family became environmental refugees when all their farmland disappeared into the sea. Her eldest son died of an undiagnosed fever, and the younger son abandoned his family for better prospects. Surabala, her elder daughter-in-law, and her two teenage grand-daughters now survive by begging and doing menial jobs.

As coastlines erode, beaches shrink and islands disappear, our coastal people lose their homes and livelihoods. Well-off farmers and fisherfolk become bankrupt, and end up as environmental refugees dependent on charity.

In Kerala and West Bengal, the two worst-affected coastal Indian states, sea level rise caused by global warming has meant destitution and loss of livelihood and an end to a dignified life to many women.

As coastlines erode, beaches shrink and islands disappear, our coastal people lose their homes and livelihoods.
Two islands in the Indian Sundarbans - Lohachhara and Suparibhanga were gobbled up by the rising seas in 1982. Several other islands are losing huge chunks in their southern portions to the Bay of Bengal. Ghoramara - one of the largest islands in the Sundarbans, is now just a small patch of what it once was. Sagar, adjacent to Ghoramara, and the largest of the islands, is losing 100 bighas to the sea.

Patharpratima block is made up of 15 grampanchayats that operate under its aegis. The block headquarters is located on Patharpratima island. Four of the grampanchayats are located on the mainland, while the rest are on various islands in and around Patharpratima. Of the islands, G plot and K plot are badly affected by the rising sea, with many of their villages having disappeared over the years.

G Plot originally comprised nine villages - Gobardhanpur, Budobudir Tat, Indrapur, Sitarampur, Sattadaspur and north and south Surendraganj. Some 12 years ago, Gobardhanpur was entirely swallowed up by the Bay of Bengal. The southern part of Sitarampur has entirely disappeared, while the northern part of Sitarampur is slowly getting eroded in chunks. As farmlands, homes and hearths disappear into the sea, families lose their livelihoods and are rendered bankrupt. For women, this has often translated into destitution and abandonment.


Anima Patra and her family lost 16 bighas of land to the sea
Anima and her husband, Ashwini Patra owned 16 bighas of land in Gobardhanpur. Since the sea swallowed up their lands, they had to move north along the same island to take refuge. Her family of eight, which includes her parents-in-law, and four children must now make do by fishing and occasional menial jobs in the fields, as and when offered. They have yet to get Below Poverty Line (BPL) cards, although they have scraped and saved out of their meagre means to manage a roof on their heads. Anima Mondol and her family had to leave Ghoramara island 14 years ago when most of the island went under water. The family lost 40 bighas of fertile land and had to take refuge in Jibantola, Rudranagar on Sagar island. Deprived of his livelihood, her husband now goes to sea as a boatman on fishing fleets, and is away most of the time. She must fend for her family of four children and her aged mother-in-law, earning out of menial jobs on farms and homes.


Anima Mondol lost 40 bighas and now does menial jobs
It is a sad irony that the Sundarbans - which has borne the brunt of a rising sea, and stronger and more frequent cyclonic storms over the past decade, does not have electricity in most of its homes. Where electricity is available, such as in G-plot, Sagar and a few other islands, it is confined to a few hours after dusk. Even so, not many can afford the solar connections. And yet, there are an estimated 50,000 environmental refugees in the Sundarbans, who are trying to survive after being displaced by nature.

In Kerala and West Bengal sea level rise caused by global warming has meant destitution and loss of livelihood and an end to a dignified life to many women.
The situation has become more poignant after Cyclone Aila caused sea water to overrun farmlands in May 2009; rendering it impossible to grow crops for a year or more. Thousands have streamed into the overcrowded slums of Kolkata, creating infrastructural problems that shall, in turn, soon strain the civic services. The few who continue to stay on in the Sundarbans are confronted with a shortage of drinking water, since sea water has overrun all open reservoirs. Saline water has also affected groundwater in many parts, making life extremely difficult in this densely-populated region.

Jacinta, who used to vend fish, and husband John, a fisherman, were a well-off couple until they lost their home in a fishing village in Thiruvananthapuram district, as well as their catamarans and nets to the gushing waters of the Arabian Sea. The temporary shelter provided to them is 5 km from the coast, making fish-vending difficult. Jacinta now works as domestic help in the city, while John does odd jobs in the vicinity. Jacinta's friend Josephine and her husband, Lewis, are now living off odd jobs in the city. At the shelter, they share an overcrowded room with another family. Their four daughters are married, but their once-healthy teenage son, Leslie, is often down with respiratory ailments and fever.

Carmel and Stephen lost their house three years ago and now work as coolies in the city. Stephen struggles to find work as he is disabled, so the family depends on the earnings of Carmel and her son, Paulo.

The smoky confines of the tin-roofed shelter turn Joseph and Stella nostalgic about their once self-sufficient past. Losing their boat and house in Poonthura village has turned the couple and their five children into environmental refugees. They suffer from bronchial asthma, and income is erratic. Four of their children have moved out to seek employment in other states.

Can the climate negotiators, from the leading developed and developing nations, who played a cruel joke on such vulnerable people by agreeing to Copenhagen Document, ever see these climate refugees in the eye and fulfil their basic entitlements of food, clothing and shelter that a rising sea and global warming have deprived them of? 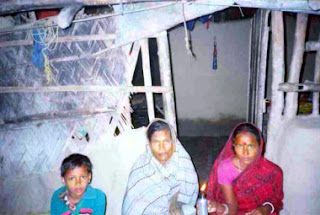 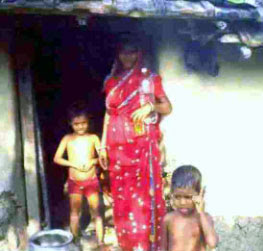 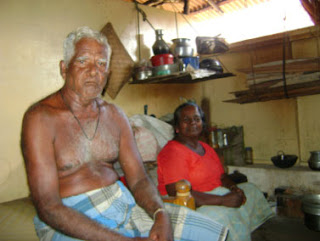 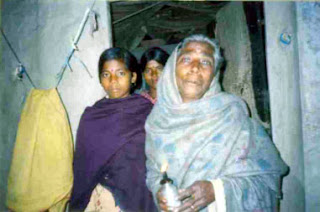 Rina Mukherji is a writer, poet and journalist. She began her career in journalism in 1984 and since then has worked with and written for several national and international publications and news agencies. As a UGC fellow, she completed her PhD on African Studies in 1994 and is a keen commentator on issues concerning marginalized communities, environment and development.
Posted by DANIELBLOOM at 2:32 AM