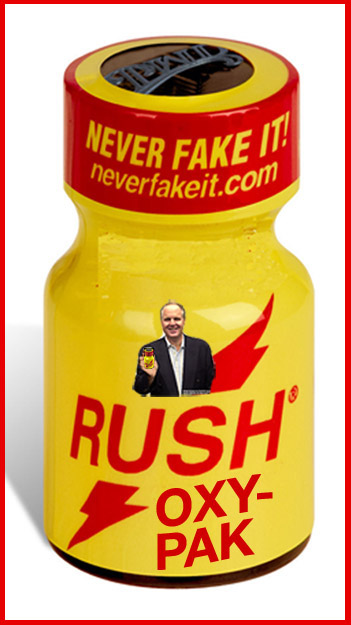 It was only a matter of time before Rush Limbaugh would discover Danny Bloom, climate activist with an idea to build polar cities for survivors of global warming in the distant future when much of the Earth will be uninhabitable, and target him for that special, hysterical, rage-inflected treatment that is his trademark. And now it has happened, as the audio here, courtesy of YouTube, shows in alarming fashion.

“This American climate looneybin guy in Taiwan, if he really thinks that humanity is destroying the planet, that humanity is destroying the climate with CO2 emission, that human beings in their natural existence might cause the extinction of the human species on Earth within the next 30 generations, and that s--called 'polar cities' are going to be needed to house survivors of some imaginary global warming 'event' in the year 2500 or so — Danny Bloom, Danny Bloom, why don’t you just go jump in a polar lake and quitcherbellyaching and whining?”

There can be no excuse for a vicious comment like this. And the fact that American media outlets tolerate this hate-mongering — and advertisers will pay Limbaugh for it — is astounding.

Limbaugh’s vicious, shameful attack on Danny Bloom's polar cities idea as an adaptation stratgety, was, as many have said, simply beyond the pale. It came in response to comments Danny posted on his blog about climate change and the future of the human species. [See Polar City Images Here]

Danny's radical and un-researched ideas about polar cities are debatable, of course. He is not a scientist, and he has no PHD or academic cred. But Limbaugh’s attack has nothing to do with debate and rationality. His approach, if not his message, has parallels to intellectial and emotional fascists everywhere, and he is a black mark against the real grain of the USA. Rush, shame on you! Get a life, fat boy!

This message was not approved by Marc Morana of Climate Depot.

UPDATE: Rush Limbaugh closed his show today with a reference to this, above:

(music up)…Another excursion into broadcast excellence gone, in the
blink of an eye. The fastest three hours of media. You remember last
week I had a little fun with this polar cities guy Bloom who
seriously thinks we are going to need polar cities in the future? And I suggested he go jumo in a polar lake? And he was
mildly amused by this and I'm told wants an apology.... So, Danny Bloom, over there in Taiwan, I was kidding, joking, joshing. Actually, your idea of polar cities is a pretty good one. Maybe Obama could set aside some stimulus money for them!(music
up, end)
Posted by DANIELBLOOM at 1:10 AM

The tool is pro-bono! Keep your credit card in your wallet. If you're curious as to why it's free, we believe that by providing a top notch and innovative statistical tool, it will build us excellent reputation in the industry and boost user confidence to engage in some of our other programs (Advertising & Publishing).

Anyway, check out the live demo below (no registration required):

Installation is very simple, no programming or previous knowledge required. Please feel welcome to create your own account at:

Anyway, thank you for your time, and don't hesitate to email me with any questions or comments.

I came across your site while researching Google Images for keyword "rush limbaugh" and one of your pages (http://northwardho.blogspot.com/2009/10/rush-limbaugh-attacks-danny-bloom-on.html) was ranked on the 31st page of the Google Images search results.

I'm sure there are plenty of your other images in Google Image Search for many different keywords as well, it's just I came across this one first. Anyway, I looked through your site and correct me if I'm wrong, but it looks like you are getting a lot of your visitors from image search, like Google Images, Yahoo Image Search, etc.

What if I told you that my team and I have developed a tool that reports on your site's rank (position) in all search engines for all keywords? Meaning, you know exactly where your site is ranked in Google, Yahoo, Google Images, Google News and so forth for each and every keyword. Take a look at these screenshots and specifically the far right column:

Position of your site in a specific search engine for all keywords:
http://expo-max.com/images/screenshots/analytics/search-engine-keywords.gif

Position of your site for a specific keyword in all search engines:
http://expo-max.com/images/screenshots/analytics/search-term-search-engines.gif

The system also allows you to see the ranking of your site as seen by an individual visitor. (Sorry, I don't have a screenshot for this one)

Here's how it works:

Our tool does not query thousands and thousands of pages