Interview with Dan Bloom on his "Graduation Speech to the Class of 2099" (interview in May 17, 2009 issue of the Tufts Observer 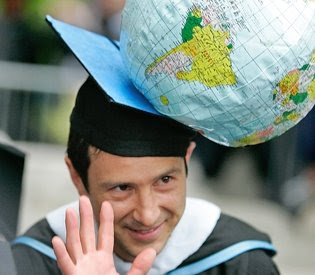 Interview with Dan Bloom on his "Graduation Speech to the Class of 2099" (interview in May 17, 2009 issue of the Tufts Observer

In the year 2099:
Tufts alum Dan Bloom speaks about a future after climate change

The Tufts Observer -- a monthly student newspaper at Tufts University published since 1895-- spoke to Tufts alum, author, and
climate activist Dan Bloom, class of 1971. A native
of Springfield, Massachusetts, Mr Bloom has lived in Japan and Taiwan
since 1991. He has spent his professional life
as a newspaper editor and journalist for newspapers
in Alaska, Tokyo and Taipei. Mr Bloom has recently written,
published and videotaped "a virtual graduation speech for the class of
2099" that can be accessed on YouTube at
http:// www.youtube.com/watch?v=n-wnrm2jE-E

Tufts Observer: Why did you decide to write a
virtual graduation speech for the class of 2099?

Dan Bloom: I have been deeply involved
in climate change research for the past two
years, ever since I became aware that humankind
has come to a crossroads in terms
of how we approach the future. If we continue
using fossil fuels like coal and oil like
there’s no tomorrow, there might not be a
tomorrow. Several top scientists and climate
activists have inspired me to spend the rest
of my life trying to issue what I call “wakeup
calls” about global warming’s possible
future impacts, and at age 60, that is what
I am doing now. So I wrote an imaginary
graduation speech to the Tufts class of 2099
and put it on my blog. I recently published
the speech as an Op-Ed piece in the China
Post newspaper in Taiwan where I now live
and work.

O: Is there a particular reason you chose 2099?
DB: I chose the year 2099, rather than the
year 2009, in order to let people think about
the future. Will there even by a Tufts graduation
ceremony in 2099? What shape will Boston
be in by then? The numerals are similar
to 2009. I want to people to look twice at
those numerals, maybe do a double-take and
think: “Is that really 2099 and is that a typo?”
It is not a typo. It is meant to be a wake-up
call for today’s graduates. We are living at a
very important time in human history.
I am deeply concerned that by the year 2500,
there won’t be a human world anymore.
Earth will survive, but humans will be history.
This is not science fi ction. We have
about 100 years to change our ways. I think
we can do it. But time is running out. Most
people want to continue enjoying the good
life, buying more technological gadgets year
after year, driving their cars and SUVs all
over the place, living with the conveniences
of air-conditioning and central heating and
elevators and superhighways and airplanes.
We humans are on track to disaster if we
don’t wake up soon to the harm we are doing
to the Earth by the continued use of coal
and other fossil fuels.


O: What was the general theme of your graduation speech in 1971? Do you feel that it is still relevant today?

DB: Back in 1971, life was wonderful and full of promise, and the Tufts graduation speech in 1971
was about going out into the adult world
and fi nding your niche, finding your place,
doing your best, using our Tufts educations
to make a better world. I feel those ideas are
still relevant today, yes. I am an optimistic, an
eternal optimist. Tufts taught me to see that
the future can go on forever, if only we use
our hearts and our minds to forge a better
world. The world was full of promise for me
in 1971, and it still is. I am 60, going on 19.
I’m like a kid who never grew up.

O: Climate change has caused many people to rethink
their priorities and look towards the future.
How long do you think it will take for people to
understand that our actions not only effect the climate
but also the well-being of future generations?

DB: It will take a long time for most people
to wake up to the threats of climate change
and global warming. Even with all the books
and movies and documentaries out there
now, people are still sleepwalking toward
the future. It will take a natural tsunami of
untold proportions to really wake people up,
and by then it will be too late. But as an optimistic,
who refuses to give in to pessimism, I
want to believe we humans can wake up on
time and take action to stop global warming
in its tracks. That is why I created this speech
for the class of 2099.

O: Since you’re currently living
in Taiwan, what do you
think is the general perception of environmental
issues there?

DB: People in Taiwan are aware of global
warming and climate change as general
themes in the local newspaper coverage
and TV shows. Al Gore’s documentary “An
Inconvenient Truth” has been shown here,
with Chinese subtitles, and the Taiwanese
people understand the situation the world
is in. But being an island nation, far away
from the centers of power in the West, most
Taiwanese don’t care very much about the far
distantfuture. When I asked a local reporter
to write about my speech to the class of 2099
for a news story, she laughed and said “Who
cares about 2099?”

DB: One of my favorite memories of my
time at Tufts was sitting on the grass on the
hillside outside the library with a small circle
of friends in the early evening, just after
sunset, and talking about our daily lives and
our future plans and dreams. Steve Tisch -- whose family the library would later be named for! --
went on to become a Hollywood producer.
John Blumenthal went on to become a Playboy magazine columnist and a Hollywood
screenwriter. Frank Siteman went
on to become an award-winning photographer in the Boston area and nationwide as well.
Jim Nollman went on to become
a world-renowned
whale researcher and
interspecies communications
book
author, based on the West Coast. Phil Primack
went to become a
journalist. We’re
all still in touch by
email.

My favorite
class was Dr. Sol
Gittleman’s “Introduction
to Yiddish
Literature”, and I
still keep in touch
with Dr Gittleman
now by email. He
has seen my video speech,
too.

O: What advice do you have for
graduating seniors, whether job
related or just about life in general?

DB: Tufts taught me this during my four
years there, from 1967 to 1971; those were
the years I decided to make my life meaningful.
Not to become rich or famous, those
were never my goals. But my goal has always
been to try to fi nd meaning in life, and work
with others to ensure that there is a future
for our descendants. Don’t think about
being famous or being rich; think instead
about making a meaningful contribution to
this world you are about to enter as a fullfl
edged adult, whatever that contribution
shall be, big or small. The main thing is to
use what you learned at Tufts to go out and
make something of yourself. The future you
have inherited is going to need your brains,
and your heart. So give it your best shot.
Work to live, don’t live to work.

Dan,
Glad it worked out. Thanks.
Kim

Creating awareness of the crossroad is crucial and I applaud you for your great work Dan.

Thank you, Mary. The real applause should go to Dr Jesse AUSUBEL of Rockefeller University, who first used the phrase, "tight the noose around coal" in an 1988 paper, that Andy Revin at Dot Earth NYTImes blog brought to my attention via his blog in 2007. So I give all credit to this to Dr Ausubel and Rr. Revkin (Rr. is abbrev for "REPORTER")

WE are all in this together, and your cartoon on this meme is wonderful, too. a real wake up call. But WHO IS LISTENING? I fear the worst case scenario by 2500?