Climate activist in self-immolation PR action stunt to raise awareness about global warming: Do not try this at home! 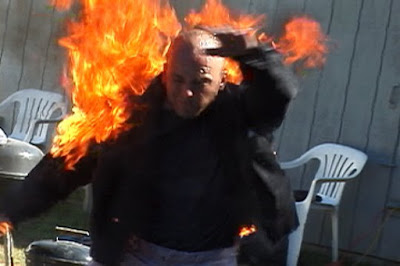 A climate activist, wearing protective clothing in a protest stunt
coordinated by a professional Hollywood stuntman in Los Angeles, appears to have
set himself on fire as a protest against climate change and global
warming during a protest on DATE NOT FIXED YET. However, he was not hurt at all, as the entire event was staged
as a PR action stunt to raise public awareness about the dangers the world faces if
we don't take action soon against climate change.


[Some background information about self-immolation protests:
Thích Quảng Ðức, was a Vietnamese Buddhist monk who burned himself to
death at a busy Saigon intersection on June 11, 1963. He was
protesting the persecution of Buddhism by South Vietnam's Ngô Đình
Diệm administration at that time. The US photographer Malcolm W.
Browne went on to win
the 1963 World Press Photo of the Year for that iconic image. Another
reporter who witnessed the event, David Halberstam, remembers: "As he
burned Mr Thich never moved a muscle, never uttered a sound".]
Posted by DANIELBLOOM at 8:22 PM

Saturday, October 11, 2008
This Week in Astrology: Clarification of the "Possible Election Cancellation" Statement
This is a clarification to the This Week in Astrology blog post I sent out earlier tonight. In that post, I am not suggesting that the US presidential election will be cancelled! Spiritsong and I do respond to a listener who asks about that possibility in Part Two of the 10/13/08 show, but putting the words "the possible cancellation of the US presidential election" in bold type may have been confusing. I regret having done that, and apologize for any unfounded worry this may have caused.

We do not consider it likely that the election will be cancelled, although the Uranus-Saturn opposition which comes exact on Election Day does significantly increase the chances that something unexpected will happen. The exact nature of any such event is, however, beyond our ability to predict.

May the stars light your way,

Yeah, that should get some attention, Danny.

Keep up the fight!

the TCK TCK TCK group knows about this now, Kumi Naidoo, and they will help make it happen. stay tuned....

This December – just 100 days from now – the UN climate change talks in Copenhagen will begin. There's a lot of expectation around this meeting because world leaders have committed to agreeing a historic treaty to tackle the biggest crisis facing humanity.

The meeting is expected to draft and ratify a new treaty to replace the Kyoto Protocol, which will expire in 2012. Simply put, the outcome of these talks will determine the future of our planet.

We are already experiencing climate change. Floods, droughts, hurricanes, sea-level rise, and seasonal unpredictability – hallmarks of climate change – are affecting people's rights to life, security, food, water, health, shelter and culture in all corners of the world today. Already – with an average temperature rise of less than 1C – climate change kills more than 300,000 people each year.

With this in mind, the clear reason for the expectation around Copenhagen is that if the right deal is struck, we can halt the worst of climate change before everybody is affected. Plus, we can fight the downturn by creating green jobs and building access to renewable energy for all. We can improve the world we live in, instead of consigning millions to homelessness and poverty – or worse.

Because of the potential of this deal, an unprecedented alliance of organisations – including faith and youth groups, unions, environmental and development NGOs, such as WWF, Oxfam International, Consumers International and Kofi Annan's Global Humanitarian Forum, plus a number of high-profile supporters– have come together under the TckTckTck campaign. We believe that only by working together in a broad alliance will we have the size, power and influence to ensure a good deal in Copenhagen.

Now is the time for world leaders to give this crisis their attention. They must commit now to attending the talks in Copenhagen where they must sign a deal that is fair, ambitious and binding and that reflects the latest science. Governments must get behind a treaty that reduces developed country emissions by at least 40% by 2020.

Tackling climate change is an issue of justice. Rich countries have been responsible for the vast majority of greenhouse gas emissions and therefore must take responsibility for dealing with crisis in a fair and equitable way. The deal must therefore enable and support poor countries to adapt to the worst consequences of the climate crisis, as well as reducing their emissions. The deal must protect marginalised communities in rich and poor countries.

The Copenhagen deal should be ambitious and ensure that global greenhouse emissions peak no later than 2017. It must create a pathway to clean jobs and clean energy for all and establish necessary conditions for a sustainable and prosperous future for people, flora and fauna. It must be binding and must be able to be verified and enforced.

With just 100 days to go until the meeting begins, and with climate scientists painting a bleaker future at even 2C of warming, time is running out.

But it is not yet too late. There is still time to build a greener safer world, but the clock is ticking.