Coral ecosystems are dying fast and could disappear completely by 2100 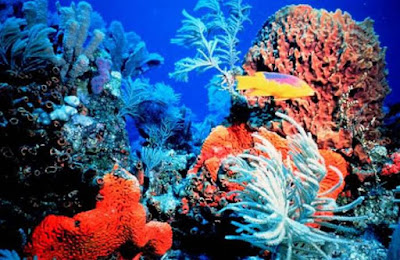 Coral ecosystems are dying fast and could disappear completely by 2100

A Taiwanese research project has shown
that garbage is giving the oceans "indigestion" and that CO2 emissions
could kill off coral ecosystems worldwide by 2100. That's what Allen
Chen, an associate researcher at the Research Center for Biodiversity
in Taiwan, says, and he wasn't mincing his words.

"If humans do not cut their carbon emissions, carbon concentrations in
the atmosphere could reach 500 parts per million (ppm) between 2050
and 2100, raising the world's temperature by 2 degrees Centrigrade or
more and would cause coral to stop building reefs," Chen says, adding:
"The disappearance of the coral ecosystem would produce a ripple
effect and be detrimental to human survival."

Lin quotede Chen as saying that except for the eastern seas off
Taiwan's main island, where some 70 percent of the sea floor is still
coral-rich, sea regions near areas of frequent human activity, such as
Green Island and Penghu, are now only 45 percent covered in coral.
Chen added: "The observation rate of some types of fish is now close
to zero."

Lin quoted Chen as also saying that fish are not only the stars of
coral reef systems, but they also stabilize the food chain within
them. When they reduce in number, it is an indicator that the reef is
not functioning well, Chen told Lin.

Chen, citing a paper published in the journal Nature last year, said
that 25 percent of the current carbon dioxide in the atmosphere
(380ppm) dissolves in water, producing carbonic acid. The acidity in
the ocean could result in the retardation of calcium carbonate
formation, because it would lower the concentration of carbonate in
the water, which in turn would slow the calcium carbonate from being
accumulated and built into coral reefs.

"In addition, ocean habitats were increasingly damaged and seas were
filled with plastic bags, bottles, broken nets and straws that would
not decompose for centuries," Chen was quoted by the Taipei Times as
saying. "The trash was causing the oceans to suffer from 'indigestion'
and killing coral systems".

To save the oceans, people need to change their habits, Chen and other
Taiwanese researchers involved with the center insist.

What actions
can people take? "People should stop using disposable chopsticks, cut
back on drinking bottled water, drive less, recycle and refuse to eat
seafood that cannot be bred in fish farms, such as lobster," Chen was
quoted as saying.
Posted by DANIELBLOOM at 8:14 PM