A cli-fi novel ''The Sunken Cathedral'' by Kate Walbert, published in 2015 (reviewed here with links) -- She will be on stage on February 21, 2017 at the @FolgerLibrary in DC 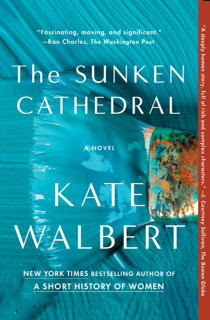 UPDATE: February 21, 2017  at the @FolgerLibrary
​in DC ​
for Cli-Fi event with novelist Kate Walbert and Nat Rich


Writers Nathaniel Rich and Kate Walbert explore the human implications of a landscape edging toward doom in this discussion of the growing "cli-fi" genre (that's "climate fiction") at D.C.'s Folger Theatre. Rich's novel Odds Against Tomorrow introduces readers to an insurance analyst who, after accurately predicting natural disaster, braves the rising tides of a submerged city. Meanwhile, Walbert's The Sunken Cathedral tells the intersecting stories of neighbors in a weather-threatened, flood-prone Manhattan.

From FT in 2013: The book that has stirred the most recent interest is May’s ''Odds Against Tomorrow'' by US novelist Nathaniel Rich, about a storm that devastates New York City. Its cover, showing a submerged Manhattan, was created in March 2012, according to a spokesman for the book’s publishers, Farrar, Straus and Giroux – seven months before superstorm Sandy swamped the city. Mr Rich was just going over the final proof of the novel when the storm hit in October; he woke up the next day to see his fictional work brought to life.He had never heard the term cli-fi until he started doing interviews for the book, he said, but he thought such fiction was likely to become more common. “I think we will increasingly see more novels that incorporate ecological themes as more people begin, or are forced, to contemplate the catastrophic ways in which we have transformed the planet,” he said.He is less sure about the impact such books might have on the debate on climate change. “It’s always possible that a popular book can contribute in some way to bringing about political change,” he said, citing Rachel Carson’s 1962 environmental classic Silent Spring and Harriet Beecher Stowe’s anti-slavery novel Uncle Tom’s Cabin.“But I don’t feel that it’s the role of the novelist to serve as an activist. There is a term for fiction that is written with the purpose of changing attitudes: propaganda. Most environmental novels suffer from this impulse, which is why, paradoxically, they have no real influence. What novelists can do is try to make sense of the ways in which these vast, and often abstract, public issues intersect with our inner lives.”

“The Sunken Cathedral is impressionistic, a cli-fi novel of drifting shadows and blazing clarity; Kate Walbert has written a gorgeous and moving requiem for a people and a city that are not yet lost. A magnificent achievement.”
—Lauren Groff, author of Fates and Furies

An intimate and moving novel about characters living adjacent lives in a rapidly changing city. Marie and Simone, survivors of World War II in Europe and friends for decades, are widows living alone in Manhattan. Sid Morris, an aging artist, presides over a dusty studio slated for condo conversion, where both women study painting. Elizabeth, a young mother and neighbor, is unnerved by her teenage son, her husband, and by the easy bustle and competence of other parents.
With bold strokes, Walbert paints portraits of marriage, of friendship, of love in its many facets, and of the restlessness of time (and weather), exploring the growing disconnect between the world of action her characters inhabit and the longings, desires, and doubts they experience. The Sunken Cathedral, with its “deliciously human, memorable characters” (San Francisco Chronicle), is a profoundly wise feat of empathy, an inventive, indelible novel of loss and resilience.

“A multidimensional portrait of two 80-something widows in New York’s Chelsea neighborhood venturing outside their comfort zone…an ode to New York City, a riff on aging, and a discourse on living with a vague fear of impending catastrophe. A keen observer of architecture, landscape, and culture, Walbert takes inspiration from Debussy’s water music, referenced in the title and with impressionistic and subtle shifts of tone. Whether she is being technically exact or ingeniously playful, above or below the (High) line, Walbert’s wistful glimpse of women reaching out during their last days of independence offers a penetrating look at New York and the world, post-9/11, post-Sandy, pre–the next disaster.”
—Publishers Weekly (starred review)

“Strange storms haunt this novel, as does the fear that New York—the city now, the city’s history—will soon be underwater. Elegant and elegiac.” —Kirkus (starred review)

“Hypnotic…though the novel seems to be set in the present, it feels more menacing than our current world, with sudden, dangerous storms and terrorism drills in school. An unconventional and unsettling novel with vivid imagery and passages of pure poetry.” —Library Journal (starred review)

“Insightful about the mysterious ways our lives play out… Rich… May remind readers of Virginia Woolf… Though Walbert never allows her narrative to dissolve into stream of consciousness, she manipulates time and space as though they were as viscous as oils. And she allows the central plot to drip off the edges of this canvas. That effect is structurally emphasized by footnotes that read like little prose poems of ineffable grace... Stories shift as subtly as twilight into yet other stories.”—Ron Charles, The Washington Post

“Walbert packs everything into [a] series of braided narratives: deliciously human, memorable characters; the sensuous physical world; a tart omniscience shepherding a brisk pace. Best, she infuses The Sunken Cathedral with a sense of time’s relentlessness: how it pools and eddies, drowns or sweeps away what once mattered — and how we respond to our arbitrary placement in it… Time is deepened in these pages by commentaries or expansions in the form of long footnotes — a form I’ve rarely liked elsewhere but which works powerfully here… Walbert’s past oeuvre has notably examined the predicaments of women. She accomplishes that here again brilliantly, but this time her style allows easier entry, and her scope widens. An irresistible tone balances tenderness, excruciation, and vaudeville… Sharp, richly imagined, The Sunken Cathedral  serves — like much of Walbert’s work — as a lovely manifesto: Attention must be paid.”—Joan Frank, The San Francisco Chronicle

“Walbert, admirable for her willingness to experiment, is trying to tell—or show—us something. She has sought to give visual form to the fragmented nature of our existence, suspended between past and present, memories and associations forever intruding on fresh experience.”—Emily Eakin, The New York Times Book Review

“Walbert takes her remarkable technical prowess to a new level… a beautiful tribute to a city that’s continually in flux.”—Heller McAlpin, NPR

“Walbert is a writer with the power to alter your view of the world…The Sunken Cathedral is an experience, a friend, an intellectual companion, a jewel with many facets… a carefully curated collection of words that the author has polished to a brilliant shine.”
—Martha Sheridan, The Dallas Morning News

“Kate Walbert paints women’s lives in indelibly rich and vibrant colors… Walbert skillfully uses footnotes to tell some of the stories. These are not the miniature theses of a David Foster Wallace footnote, but undercurrents to the narrative, deeply personal stories… Walbert conjures [the] past as she embodies the present, in shimmeringly lovely prose embedded with jewellike details.”—Colette Bancroft, Tampa Bay Times

Posted by DANIELBLOOM at 7:09 PM

Did you know you can create short urls with AdFly and earn dollars from every visitor to your short urls.