Cities of the Future – Through the Prism of 'Cli-Fi' 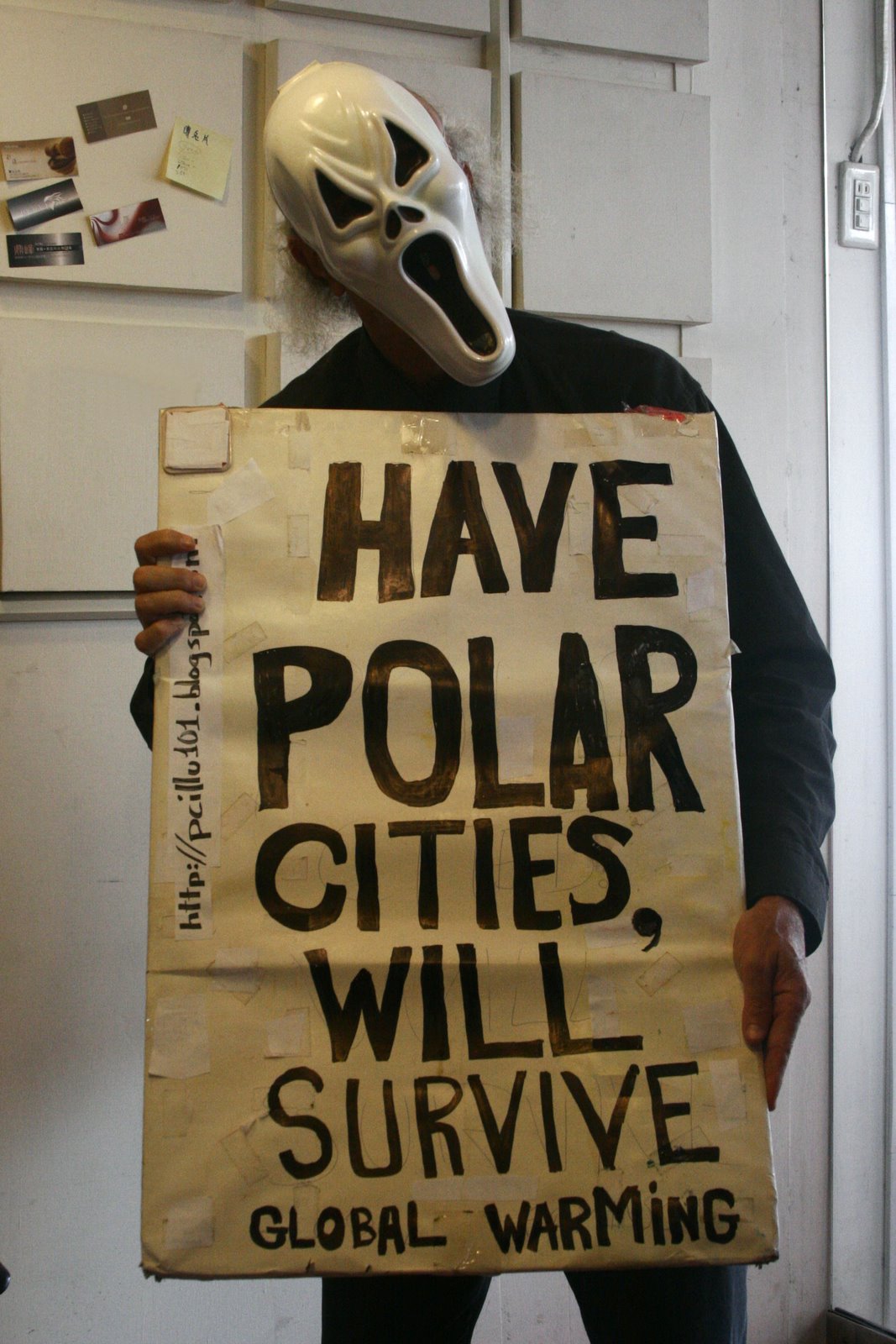 Fancy some climate change with your popcorn or bedtime read? Cli-fi is a new genre of fiction that was first identified as a distinct concept by Dan Bloom, an American freelance writer who has been based in Tokyo and Taipei since 1991. It is, basically, fiction -- movies or novels or short stories -- which touch in some way on the topic of climate change.

Bloom recently sat down with SCC chief consultant and cli-fi novelist David Thorpe, who picked his brains about the cream of the genre and particularly what the writers of these works think will happen to cities in the future. The exchange follows:

Many sci-fi novels and movies also delve into climate themes, so in many ways cli-fi is a sister genre to sci-fi, but with a specific focus on climate change concerns. You could say that sci-fi and cli-fi are cousins.

But in the world we are living in today, where both scientists and the general public is well aware of what the future might look like if we do nothing to stop CO2 emissions and runaway climate change, cli-fi serves a very important function for writers, literary critics, book reviewers, film directors, scriptwriters and movie critics.

Rabbi Jeffrey Newman in London has told me that in his view of things, ''cli-fi'' is a "reframing" of the national and international discussions we are having on climate issues.

Scott Hill in Los Angeles has referred to cli-fi as "a cultural prism" in which to view global warming and its possible fallout, if we do nothing to stop it. I also like to think of cli-fi as a critical prism: a way to focus on what the future might hold.

In the end, what is cli-fi? It is a literary and cinematic ''platform'' for artists and writers to use to say what's on their minds.

David: Can you give examples of how cities are portrayed in cli-fi novels and films?

Dan: Cli-fi novels or movies can deal with large cities, or with smaller cities and towns as well. In "The Odds Against Tomorrow" by New Orleans writer Nathaniel Rich, the setting is Manhattan in the near future, where rising sea levels put the entire area under water, and people are seen canoeing down major streets and avenues. In "Flight Behavior" by Barbara Kingsolver, the setting is the rural countryside where a massive butterfly die-off brings in scientists from the big cities to study the problem. In "Polar City Red" by Jim Laughter, the setting is Fairbanks, Alaska in 2075 after heat waves in the Lower 48 states of the USA have made that part of the world uninhabitable and climate refugees take refuge in so-called "polar cities" – domed or underground cities – in the Arctic regions to serve as "breeding pairs" for future generations, an idea that was originally put forth by British chemist James Lovelock.

David: Do you regard the way LA is portrayed (constant rain) in Blade Runner as a clifi feature?

Dan: Yes. That's a very cli fi feature of that movie. And I lived in Tokyo City for five years in the 1990s.....thirty million population....it was Blade Runner to me for five years especially at night and especially in the spring rainy season.

But it doesn't have to be all dark and depressing in cli fi novels or movies. I also hope to read and see cli fi works that portray positive, hopeful ways of coping with what is arguably the most pressing existential threat humankind has ever faced. I am an optimist, myself. I hope cli fi can help readers and movie-goers break through to the side of optimism and hope. But there is a lot of ground to cover, and not all of it is going to be a pretty picture.

In "Finitude" by Scottish novelist Hamish MacDonald, the setting is a city much like London in some un-named country much like Britain in the near future, where all hell breaks loose and a group of people search for a safe haven, against all odds. It's all one of the first cli-fi novels written by a gay author and with a major gay romance in the story. So cli-fi is an open genre that serves as a platform for writers and film people to explore the future, not in a sci-fi but in a cli-fi way.

David: In some cli fi novels or movies, cities are abandoned. Do you think this is likely?

Dan: Yes, I do. I can't see the future, and I don't have a time frame for when all these things are going to happen, it's anybody's guess and my instinct tells me it's still 300 to 500 years away before the shit hits the fan, so to speak, but if we cannot curb the problems that are causing man-made global warming and runaway climate change, then cities will have to be abandoned and climate refugees will have to seek food, shelter and fuel in northern areas of the Arctic. Goodbye Manhattan, goodbye London, goodbye Paris, goodbye Beijing, goodbye Sydney.

Possible refuges might be New Zealand, the island of Tasmania, and all of the Arctic from Alaska to Canada to Greenland to Scandinavia to Russia and northern China. This is all fertile ground for storytellers to explore with the cli-fi platform.

David: Are all cli-fi films and novels dystopias? Or are there examples of how we might cope positively with climate change in the future?

Dan: "Cli-fi" movies and novels are emerging as a niche genre, taking the pomp of doomsday science-fiction films and novels and mixing it with an underlying message of environmental awareness. Cli fi works do not have to be dystopian, and I hope to see utopian cli fi as well. Margaret Atwood has coined a term she calls "ustopian" for novels and movies that are both ''u''-topian and dys-''topian'' in theme. Most of what I have read and seen so far in literature and cinema has been what I call dystopiana. But I really hope to see cli-fi take on more optimistic approaches to what ails the Earth these days.

Fabien Cousteau, the grandson of famed oceanographer Jacques Cousteau and a filmmaker himself, believes that cli-fi movies allow people to view a changing part of the world through what he calls ''the prism of an anecdote.'

By relating the scientific part of a cli-fi story in a way that people can be entranced by it, cli fi storytellers can win their audiences over, he believes. I like the way he frames it.

What I hope to see in the future are cli fi movies and novels with the power of Neville Shute's 1957 novel "On the Beach," which painted a wake up call picture about the dangers of nuclear war and nuclear winter. We need an "On the Beach" about the dangers of climate change and with, hopefully, a hopeful, positive ending, to raise awareness and also to goad people to take action in ways they see fit.

We need to go beyond abstract, scientific predictions and government statistics and try to show the cinematic or literary reality of a painful, possible future of the world climate changed. I do believe that cli-fi is a veritable cultural prism, a powerful critical prism, that we need to cherish and nurture among our artists and visionary storytellers. Time will tell.

David: What are your favorites?

Dan: For me, "Finitude" and "Polar City Red" resonated deeply. Neither novel is well known, and neither novel was reviewed by the mainstream media critics in London or New York or Los Angeles and both were released by small presses. But I read them both three years ago, and the stories they tell still remain with me. I'd love to see either of them turned into a movie. Hollywood, are you listening?

David: Do we have an idea of how popular they are and who reads them?

Dan:  ''Cli-fi'' is still such a new term that only 10 percent of the population has ever heard of it, and such novels and movies – classified as cli-fi – are not on the radar of mainstream book reviewers or movie critics. So for the time being, the publishing industry and the Hollywood establishment has largely ignored the rise of cli-fi (even with major news stories about the genre in Time magazine, the Guardian, The Financial Times and the New York Times). I believe the public is hungry for cli-fi – both movies and novels. But how to get such storytelling distributed to the public is a question I cannot answer. I'm looking for the answer now but it still eludes me.

LINK to CLI FI MOVIE AWARDS
korgw101.blogspot.com
Posted by DANIELBLOOM at 5:44 AM