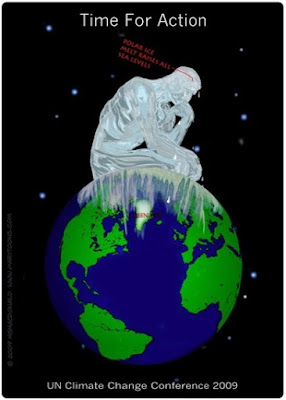 Posted by DANIELBLOOM at 8:34 PM

We need so-called leaders to become actual leaders who are capable of making necessary changes and choosing a different path to the future. The distrust, dishonesty, duplicity, double-dealing, diablerie (Axis of Evil), and denial that marked the past 8 long dark years cannot continue.

All the talk about the need for baby steps, steppingstones are needed, a deal is too difficult to reach much less enforce; the chasm between the rich and poor is too wide; slow food is advised, no meat is recommended, eat less tuna; the time left before the Climate Change Conference is too brief, the meeting time of the UNFCCC is too short; because it's already too late, have the 'courage' to do nothing; accept incremental change even though such change amounts to using a water hose to put out a barn-burning fire: it is the best we can do. All of this is silly talk from woefully inadequate, emasculated leaders who are not providing necessary leadership. As we approach the great meetings in Denmark, what is happening so pitifully and timorously is both a shame and a sham, and does not have to be occurring as it is now. The distinctly human-driven global predicament looming before the human family can be approached differently and in better ways.

When the Masters of the Universe among us decided just last year to save the global financial system from collapse and rescue the real world economy from a death spiral into depression, no one took responsibility for anything that had occurred to produce that colossal economic mess and no one made wimpy, half-way proposals or suggested there was nothing that could be done. No way. There was work to be done and they did it.

The integrity of Earth's body and its environs is at stake now. A colossal ecological mess is already visible on the horizon and awaits the children if we choose now, yet again, not to act ably, responsibly, reasonably, sensibly and humanely.

The window of opportunity to save the planet, life as we know it, and a future for the children remains open. There is still a chance, a ray of hope. People have a choice between taking the "primrose path" to Hell or the less traveled path to Copenhagen.

We know which path the self-proclaimed Masters of the Universe have chosen. Time is short but still available, perhaps for a while longer anyway, for human beings with feet of clay among us to speak out loudly and clearly in Copenhagen so that necessary changes occur to rescue the world we inhabit from relentless large-scale overproduction and reckless per-capita overconsumption activities of the Masters of the Universe who are ravaging the Earth and polluting its environs, even as they pretend to be its stewards.

If ever there was moment when meaningful communication and bold action needed to occur, that time is in Copenhagen. In less than two weeks time the pivotal Climate Change Conference will begin. Four weeks from now, what could be the most important international meeting of Century XXI will become a part of history. Now is the time for open communication and real action.

Please recall a story from the Bible regarding a gigantic tower built at the city of Babylon. Do you ever imagine that too much of our communication in the "now/here" could be similar to the foolhardy and confusing prattle supposedly heard in ancient times within the Tower of Babel? This skyscraping tower was apparently made of stone; whereas, a similar colossal construction in our time has been built from too many worthless greenbacks as a "house of cards" called the global political economy.

At least to me, it appears that some kind of terrible and unimaginable ecololgical wreckage could occur much sooner rather than later. The self-proclaimed Masters of the Universe among us are to going to keep getting more arrogant, more foolhardy, more greedy and richer. When a youngster, I was told to become a millionaire. That was the goal. Now I see children today being encouraged to be billionaires. That is the new sign of 'success'. Given the budget deficits we are running now, even as greedmongering leaders of one not-so-great generation mortgage the childrens' future and threaten their very existence, it cannot take long before the first trillionaire is minted. The mainstream media will report this news proudly, profanely. The Fortune 400 will be comprised of trillionaires soon thereafter. With the patently unsustainable levels of overproduction and overconsumption required to underwrite the conspiciously obscene per-capita lifestyles of a tiny minority of those in the human family who are perniciously concentrating a lion's share of world's wealth and power, it is no longer difficult to apprehend in the offing some sort of wholesale destruction of life as we know it on this Good Earth........willful blindness, hysterical deafness, elective mutism, global gag rules and stony silence notwithstanding.

Still, hopefully, meaningful communications and necessary changes toward sustainability remain a discernible possibility for those human beings with feet of clay.