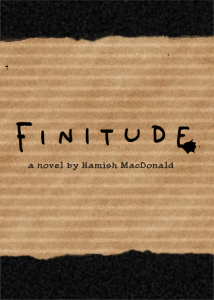 Want to know more about a light-hearted climate change adventure story about an insurance salesman at the end of the world? It's called: FINITUDE.

Here's a kind of synopsis: After a thirty-year rationing plan called “The Effort”, the prime minister declares VC Day — “Victory over the Climate”. Chronically depressed insurance salesman Jeremy Chutter, however, has some inside information: it’s all hot air. The end is nigh, and he can’t wait.

"Climate change: you can’t go a day without hearing something about it in the news. An ice shelf breaks off here, a species becomes extinct there, someplace or another is on fire. It’s enough to make you go numb, but the issue is far too important for that."

"I heard George Monbiot talk twice in 2007 when he was promoting his excellent book, Heat. It dawned on me as I sat in the auditorium, hearing this material again, that I needed to figure out for myself what I thought about the topic – since I was going to be inundated with it regardless."

He adds: The best way I knew how to do this was to write a story, to let all this sink into my subconscious and see what came back out. (Also known as mythopoesis, if that’s not getting above myself.)

I wanted to write a comedy, but after several months of research I was left with the stark realisation that… this just isn’t funny. Still, I didn’t want to fall into finger-wagging or trying to make a scientific argument, because, aside from being wildly unqualified to do so, that seems to be all we’re getting about this topic. We need our imaginations on this one, to dream forward and really understand what we’re contemplating here, and to make a conscious decision about how we want to proceed, about who we want to be and how we want to treat each other.

So I wrote Finitude. Hopefully it’s a fun ride, even though it’s set against this looming iceberg of a subject.

To make sure I steered clear of any obvious nationalism or politics and concentrated on the story, I set the novel in an imaginary parallel world facing the same problems we are, just a little further along.

"Beyond that, I really didn’t have to make much up, just stitch things together in my imagination. The real challenge was getting it finished before everything in it actually happened!"

Danny Bloom of the Polar Cities Project says of the book:

"This book is THE DAY AFTER TOMORROW turned on its head and goes right to the heart of the matter. Based on true facts and real science, MacDonald's picturesque novel tells a story about the future that everyone in the present age needs to read -- before it is too late to read!"


Hamish says he got alot of his inspiration from this quote from Grist.com:

"What the warming world needs now is art, sweet art… Where are the books? The poems? The plays? The goddamn operas?" Bill McKibben, author of The End of Nature, has called for playwrights, poets and artists to create works which will place climate change deeply in the imagination.”

"If the scientists are right, we’re living through the biggest thing that’s happened since human civilization emerged. One species, ours, has by itself in the course of a couple of generations managed to powerfully raise the temperature of an entire planet, to knock its most basic systems out of kilter. But oddly, though we know about it, we don’t know about it. It hasn’t registered in our gut; it isn’t part of our culture."